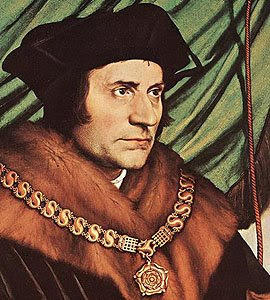 St. Thomas More was a famous lawyer and writer. He was born in London in 1477. His father had been a lawyer, too, and a judge. Thomas was always grateful to his father for being so loving and for not spoiling him. Thomas' first wife, Jane Colt, died very young and More was left with four small children. He was married again, to a widow, a simple woman who could not even read or write and More decided to tried to teach her. Thomas made home life enjoyable for his family because he was so pleasant to be with. He was a real gentleman and father. During meals, one of the children would read from the Bible and then they would have fun and tell jokes. St. Thomas often asked poorer neighbors in to dinner as well. He always helped the poor as much as he was able and He loved to delight his guests with surprises. He even kept some playful monkeys as pets. Yet few could have imagined how deeply spiritual St. Thomas really was. He prayed long hours into the night and performed penances. He was very much aware that being a true Christian took the grace and help of God.

Thomas held important government positions and was for three years Lord Chancellor, another name for prime minister. King Henry VIII used to put his arm affectionately around Thomas' shoulder. Yet although the saint was a most loyal subject, he was loyal to God first of all. In fact, when the king tried to make him disobey God's law, Thomas refused. Henry wanted to obtain a divorce from his wife to marry another woman. However, the pope could not give permission, since that is against God's law. Henry was stubborn and at last he left the Roman Catholic Church. He wanted everyone to recognize him as the head of the Church in England. Thomas could not do that and he chose to remain faithful to the Catholic faith and to God. He was condemned to death for that, yet he forgave his judges. He even said he hoped he would see them in heaven.

At the scaffold, where he was to die, St. Thomas kissed his executioner on the cheek. Then he joked, saying that his beard should not be cut off because it had not done anything wrong. He was martyred on Tuesday, July 6,1535, at the age of fifty-seven. Along with his friend, Bishop John Fisher, Sir Thomas More was proclaimed a saint by Pope Pius XI in 1935. This saint is universally admired because he believed so much in the truth of his faith that he was willing to die for it. Thomas More risked losing everything: his fortune, his position, his own security and the safety of the individuals he loved most. But he held fast to the faith, even to the point of sacrificing his life. He makes us ask ourselves what we might do in a similar situation.
Posted by Padre Steve at 7:05 AM

Ok.. I am guessing that this is the the Saint for which the Thomas More Law center is named after?

That's him! If you have never seen the movie "Man For All Seasons" then you should get it on netflix! It is impressive!

Here's another post St. Thomas More (albeit with a slightly-negative bent):

Would like your comments/thoughts on this, if you wouldn't mind.
Thanks.

More never burned anyone at the stake. Henry may have, but not More.