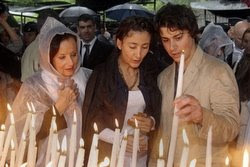 In the photo to the left you can see freed French-Colombian hostage Ingrid Betancourt, center, her mother, Yolanda Pulecio, and son Lorenzo light candles in the grotto at the Sanctuaries of Our Lady of Lourdes in Lourdes, France, July 12. The Catholic politician was abducted in 2002 while she was running for president of Colombia. (CNS photo/Jean-Philippe Arles, Reuters)

The following is a follow up to the beautiful story of the rescue of hostage Ingrid Betancourt from her Colombian captors. She says that her devotion to prayer and the Blessed Mother sustained her in this terrible trial. The former Colombian presidential candidate has made a pilgrimage to the Sanctuaries of Our Lady of Lourdes less than two weeks after she was freed from years in captivity.

French television showed the former captive walking to the Marian grotto at the shrine in the French Pyrenees on July 12. Surrounded by police and other pilgrims, she was greeted by the Bishop of Lourdes. She prayed before a crowd of thousands in thanksgiving for her life and for her freedom. Betancourt was abducted in 2002 by the rebel Revolutionary Armed Forces of Colombia (FARC), as she was running for president of Columbia.

The Colombian army staged a bloodless military rescue operation and liberated Betancourt and 14 others on July 2. She continues to pray for the many other captives still held by the FARC. The following is the Catholic News Service story on these events:

LOURDES, France (CNS) -- Accompanied by her mother, sister and children, former Colombian presidential candidate Ingrid Betancourt made a pilgrimage to the Sanctuaries of Our Lady of Lourdes less than two weeks after she was freed from years in captivity. French TV showed the 46-year-old walking July 12 to the Marian grotto at the shrine in the French Pyrenees. Surrounded by police and pilgrims, she was greeted by Bishop Jacques Perrier of Tarbes and Lourdes. The Catholic politician prayed before a crowd of thousands in thanksgiving for her life and freedom. Betancourt was abducted in 2002 by the rebel Revolutionary Armed Forces of Colombia, or FARC, while she was running for president. On July 2, the Colombian army staged a bloodless military operation and liberated Betancourt and 14 others. "Take care of those who are left behind me," Betancourt said, referring to the estimated 700 hostages still held in Colombia. "They need your strength, your hope and your life." Speaking earlier to journalists in Paris, the politician said she had "tried to maintain dignity" by meditating and praying, despite being bound and beaten by her captors. She added that she hoped to travel to Rome in August to meet Pope Benedict XVI, who had made several appeals for her release. "I know I talk with God and God replies -- people prefer to speak about the force of circumstances, rather than miracles, but I think miracles happen to everyone all the time," said the ex-hostage, who also holds French citizenship. "I have to do two things: forget and find spiritual peace, and be able to forgive. When I do this, I'll also have to recall my memories. But perhaps, in time, these won't be so painful."

God bless her and her family! We need to continue to pray for those still held in captivity as well.