Detox Your Soul This Lent 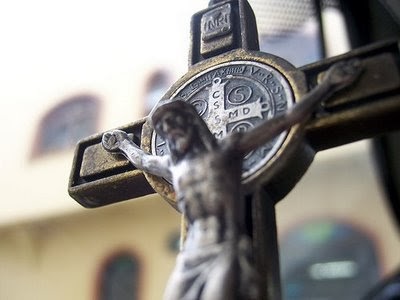 Toxins are poisons that can cause disease if absorbed into our bodies. In the spiritual world, the poison of evilhas been absorbed by our culture.

Christians are hunkering down for the spiritual battle that is intensifying and sometimes, are feeling overwhelmed. I know the feeling. But three things have lifted my spirit recently and have given me a plan to detoxify my soul this Lent

Interview with an Exorcist


While working on an exorcism story, I interviewed Father Vincent Lampert, the designated exorcist for the archdiocese of Indiana. He consulted on the bizarre case of a demonic attack on a family in Indiana. I found Fr. Lampert to be like the other exorcists I’ve interviewed over the years--spiritually uplifting. Consider that exorcists go head-to-head with evil, and then afterwards, can enjoy a good night’s sleep. That’s the kind of peace I want.

Fr. Lampert learned to be an exorcist in 2006 at the North American College in Rome. While studying there for three months, he assisted on over 40 exorcisms withlongtime Italian exorcist Father Carmine De Filippis. Fr. Lampert trained alongside Fr. Gary Thomas, whose experiences became a book by Matt Baglio called "The Rite: The Making of a Modern Exorcist," and inspired the fictionalized movie.

Fr. Lampert emphasized faith as the key to life and according to him, with faith, we need not fear evil. “The power of God is greater than the power of evil,” he said. “I don’t carry a bag of tricks with me, I bring the power and authority of Jesus Christ that he has given to his Church.”

If we stay away from the occult, go to Mass, have faith in God, and pray, Fr. Lampert says we are protected. “The focus is on faith of Jesus Christ and it’s going to be reinforced by going to church,” he said. “The devil is already on the run if you are going to church and especially if you are receiving Communion.”

Fr. Lampert is confident and upbeat. One of his secrets for peace is that he stopped watching the news six years ago. “ I choose to be a positive person,” he said. “I can’t be a Christian and walk around with a long face because no one with a long face is going to bring someone to Christ.” He said that rather than letting the world change us, we should tune out the negative as much as possible and do what we can to change the world. “I believe the Gospel has the power to change the world, and that is what I choose to focus on,” Lampert said.

Raise the Soul through the Mind

With Lampert’s message in mind, I am keenly aware that what I let into my brain, affects my spirit. I don’t plan to stop watching the news (not yet anyways) but during Lent I will fill my mind with holy thoughts. I have selected writings assembled in Meditations for Lent for daily reading. Bossuet was a Seventeenth Century, French bishop, theologian, a brilliant orator, and a student of St. Vincent DePaul. His writings are compared to those of St. Augustine and St. John Chrysostom, and reported to have been at the bedside of Pope Pius XII.

“The whole of the Christian life consists in making this journey [to Heaven] well,” Bossuet writes, “and it was to that end that our Lord directed all his deeds.”

The first day of meditations state, “”We will come to him and make our home with him” (John 14:23). “Desire that he should be in you in this way. Offer yourself to him as his dwelling and temple.”

Bossuet encourages us to look at Jesus in heaven waiting for us so that we will break the chains that holds us down. With such a vision, we are drawn to our Lord who awaits us.


Better than a cup of coffee to start the day, is filling up on angelic music that lifts one’s heart towards heaven. The music of Lent at Ephesus soothes the soul in a mystical way. Ironically, it is from a group of women who have separated from the world to answer God’s call. The Benedictines of Mary, Queen of Apostles live a monastic life in the country in the Diocese of Kansas City-Saint Joseph. Hidden from the world, they sow, tend crops, and farm animals. Yet, their voices ring out.

A young, classically trained Prioress Cecilia and her sisters use music to worship God eight times a day. It is surely his sense of humor that these cloistered nuns have an international recording deal and two other albums that have topped the charts.

Their album, Advent at Ephesus, was #1 on the Billboard's Classical Traditional Music chart for 6 weeks in 2012. Last year, the sisters’ bestselling album, Angels and Saints at Ephesus topped the chart for thirteen weeks.

They have just released Lent at Ephesus, a collection of 23 songs. Three are original compositions inspired from the Diary of St. Faustina.   “Lent is the time for us to meditate deeply on the love of God for Man,” Sr. Cecilia explained. “Forty days have been lovingly given to the church to prepare her members for the greatest mysteries of our faith.”

I can’t control the world or much of anything really, but I can start the day lifting my mind, heart, and soul to heaven. Regardless of what else you have planned for Lent, it’s never too late to add holy reading and inspirational music. I imagine that it’s the kind of daily activity that will become addicting.
Posted by Padre Steve at 5:30 PM