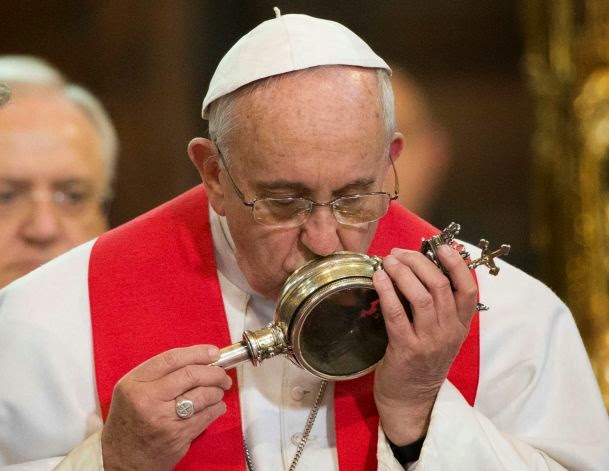 The blood relic of San Gennaro, Naples' patron saint, liquefied in the presence of Pope Francis today, the first time the miracle has occurred in front of a Pontiff since Pope Pius IX.

The miracle of the relic, in which half of the blood liquefied, took place during Francis' visit to Naples cathedral. Cardinal Crescenzio Sepe, the Archbishop of Naples, said it was "a sign that St. Gennaro loves Pope Francis: half of the blood turned to liquid.” Following applause from the faithful, the Pope said this "means the saint loves us halfway. We all have to convert a little more so that he loves us more.”

The miraculous liquefying of the ancient relic of St. Gennaro usually takes place three times a year: on the saint’s feast day on 19 September, the Saturday before the first Sunday of May, and on 16 December. Aleteia has more information on the miracle and the 4th century saint.

Pope Francis spent the day in Campania, southern Italy, visiting the shrine of Our Lady of the Rosary in Pompeii and the city of Naples. Vatican Radio has full details of the visit: