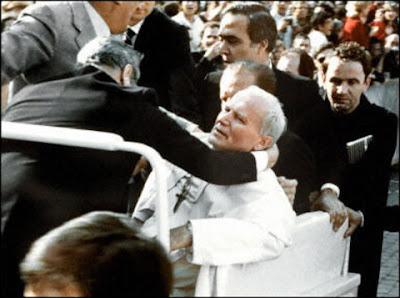 This is an amazing part of the story of Pope John Paul the Great:

As everyone knows, His Holiness John Paul II was shot in Saint Peter's Square on 13 May, 1981 - the anniversary of Our Lady's first apparition at Fatima.

Just before doctors were about to begin surgery in order to remove the embedded bullet, the Holy Father regained consciousness and instructed the doctors "do not remove my scapular" during the operation. John Paul II was, after all, Totus Tuus in his devotion to the Mother of God.

If you don't wear the Scapular, why not be enrolled this Lent?

Hat tip to the Canterbury Tales on this one!
Posted by Padre Steve at 10:00 AM