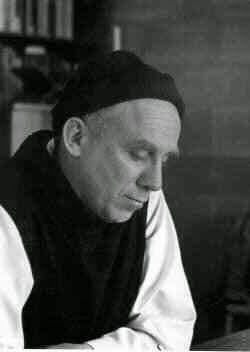 I write these words on the one hundredth anniversary of the birth of Thomas Merton, one of the greatest spiritual writers of the twentieth century and a man who had a decisive influence on me and my vocation to the priesthood.  I first encountered Merton’s writing in a peculiar way.  My brother and I were both working at a bookstore in the Chicago suburbs.  One afternoon, he tossed to me a tattered paperback with a torn cover that the manager had decided to discard.  My brother said, “You might like this; it’s written by a Trappist monk.”  I replied, with the blithe confidence of a sixteen year old, “I don’t want to read a book by some Buddhist.” With exquisite sensitivity, he responded, “Trappists are Catholics, you idiot.”
The book in question was The Seven Storey Mountain, Thomas Merton’s passionate, articulate, smart, and deeply moving account of his journey from worldling to Trappist monk.  Though much of the philosophy and theology was, at that time, over my head, I became completely caught up in the drama and romance of Merton’s story, which is essentially the tale of how a man fell in love with God. The book is extraordinarily well written, funny, adventurous, and spiritually wise.  In one of the blurbs written for the first edition, Fulton Sheen referred to it as a contemporary version of St. Augustine’s Confessions, and it was fulsomely praised by both Evelyn Waugh and Graham Greene.  Moreover, it contributed massively to the startling influx of young men into monasteries and religious communities across the United States in the postwar era.
I was so thrilled by my first encounter with Merton that I dove headlong into his body of writing.  The Sign of Jonas, a journal that Merton kept in the years leading up to his priestly ordination, became a particular favorite.  That work concludes with an essay called “Firewatch:  July 4, 1952,” which Jacques Maritain referred to as the greatest piece of spiritual writing in the twentieth century.  In this powerful meditation, Merton uses the mundane monastic task of walking through the monastery checking for fires as a metaphor for a Dantesque examination of the soul.  The Sign of Jonas is marked by Merton’s playful and ironic sense of humor, but it also gives evidence of the enormous range of his reading and intellectual interests.  To devour that book as a nineteen year old, as I did, was to receive an unparalleled cultural education.  For many people of my generation, Merton opened the door to the wealth of the Catholic spiritual tradition: I first learned about John of the Cross, Meister Eckhart, Teresa of Avila, Bernard of Clairvaux, Odo of Cluny, the Victorines, Origen, Thérèse of Lisieux, and Hans Urs von Balthasar from him.
Perhaps the central theme of all of Merton’s writings is contemplation.  What he stressed over and again in regard to this crucial practice is that it is not the exclusive preserve of spiritual athletes, but rather something that belongs to all the baptized and that stands at the heart of Christian life.  For contemplation is, in his language, “to find the place in you where you are here and now being created by God.”  It is consciously to discover a new center in God and hence at the same time to discover the point of connection to everyone and everything else in the cosmos.  Following the French spiritual masters, Merton called this le point vierge, the virginal point, or to put it in the language of the fourth Gospel, “water bubbling up in you to eternal life.”  In his famous epiphanic experience at the corner of 4th and Walnut in downtown Louisville, Merton felt, through le point vierge, a connection to the ordinary passersby so powerful it compelled him to exclaim, “There is no way of telling people that they are all walking around shining like the sun.”
Sadly, for many younger Catholics today, Merton, if he is known at all, is viewed with a certain suspicion, and this for two reasons.  First, when he was a man of fifty-one, he fell in love with a young nurse who cared for him after back surgery.  Though it is almost certain that this was exclusively an affair of the heart, it was certainly, to say the very least, unseemly for a middle-aged monk and priest to have been so infatuated with a much younger woman.  At the same time, Merton worked through this confusing period and returned to his vowed monastic life.  And the journal that he kept during that year is so spiritually alert and illuminating that I often recommend it to brother priests who are wrestling with the promise of celibacy.  To dismiss Merton out of hand because of this admittedly inappropriate relationship strikes me as disproportionate.
Read the rest here.
Posted by Padre Steve at 4:00 PM