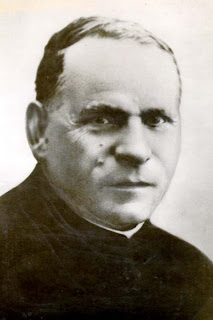 The following comes from the Black Cordelias site:

Professed priest of the Salesian Society of Saint John Bosco, born in Azanuy (Huesca), Spain, November 23, 1872, died at the Bridge of St. Josephon the road to Valencia, Spain, July 29, 1936. He is buried at the cemetery Benimaclet in Valencia. Pope John Paul II beatified him on March 11, 2001 together with 232 other victims of the Spanish Civil War from the Diocese of Valencia.

Roman Martyrology: At Valencia in Spain, Blessed Joseph Calasanz Marqués, Priest of the Salesian Society and Martyr, who, in the time of persecution, poured his blood for Christ.

In the vast inhuman massacre that was the Spanish Civil War (1936-1939), the number of victims exceeded a million, affecting people of every class and every faith. Now historians have acknowledged that within this terrible massacre, in the territories then called the red zone, in the hands of the social anarchists and communists, there was a real persecution against Christians.

The lay faithful diminished only because Christians were killed; tens of thousands massacred, 4,148 diocesan priests, 12 bishops, 283 nuns, and 2,365 religious (priests and brothers) for a total so far of 6,808 recognized martyrs. Numerous churches were destroyed.

Every religious community gave its tribute of blood; the Family of the Salesians of Don Bosco in this list is represented by 97 members, belonging to three thriving ‘Provinces’ and one of the Salesians’ Provinces ‘of the Daughters of Mary Help of Christians, and so divided: 39 priests, 26 Brothers, 22 clerics, 5 Salesian cooperators, 3 and 2 would be Salesians Daughters of Mary Help of Christians. The Salesian martyrs are grouped into three local families, Valencia, Seville, Madrid, those of Valencia having been declared blessed in 2001.

The group from Valencia consists of 32 martyrs and is headed by the Provincial Salesian priest Don José Calasanz Marqués, who was born in Huesca November 23, 1872, and his pious parents educated him with austerity and firmness of character; in 1884 at 12, he entered Salesian House of Sarriá, had spent two years when he was a witness to the visit of Don Bosco in Barcelona in 1886. He made his profession of vows in the Salesian Congregation of Blessed Philip Rinaldi (1856-1931), third successor of Saint John Bosco, a Salesian priest, the first in Spain, who was ordained in 1895.

During the first years of priesthood he worked as a secretary at the side of Don Rinaldi, learning to live the Salesian spirit, with kindness in heart, fulfilling his pastoral zeal, especially in the Sacrament of Penance. In the next 25 years he was sent to found the first college in Mataró, then starting the Salesian Work in the West Indies and later to direct the Province of Peru-Bolivia, he returned to Spain in 1925 with the office of the Provincial of Tarraconese.

The Civil War surprised this office; July 18, 1936 was in Valencia to preside over the retreat in the local Salesian House. In the early morning of July 22, the armed militia invaded red, finding the Salesians deployed along the central staircase, one of them occurred rebuked the other, because he did not agree, and fired, killing every Salesian.

They were arrested and then released to be arrested again later in the following days, Father Calasanz was put with three brothers on a truck going to Valencia, he was always under the gun, aimed by a young man, when suddenly a shot rang out, hitting him in the head. Father José Calasanz Marqués collapsed to the ground in a lake of blood, murmuring “My God.” It was July 29th 1936 and he was 64.

In the same year, 1936, at different times, others were killed in hatred of the Catholic faith and their priesthood or religious profession, 10 other Salesians of Valencia and 21 in Barcelona, including two Daughters of Mary Help of Christians, all united in a single process for their Beatification, which took place in Rome on March 11, 2001, along with 201 other martyrs of the diocese of Valencia.

For brevity of space we omit the names of 32 other martyrs Salesians, whose list is still present with the “Blessed Martyrs Salesian Spaniards.”
Posted by Padre Steve at 12:00 AM