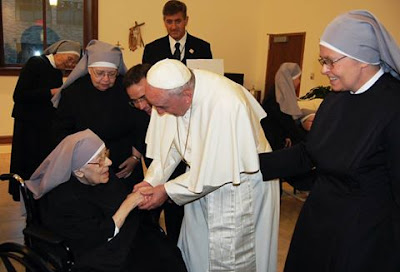 
Pope Francis paid a short visit to the Little Sisters of the Poor community in Washington, D.C., on Wednesday to support them in their court case over the contraception mandate, the Vatican's spokesman revealed.

It was a “short visit that was not in the program,” Father Federico Lombardi, director of the Holy See Press Office, said at an evening press conference during the papal visit to the nation's capital.

“This is a sign, obviously, of support for them” in their court case, he affirmed.
The sisters had filed a lawsuit against the Obama administration for its 2012 mandate that employers provide insurance coverage for birth control, sterilizations, and drugs that can cause abortions employee health plans. The sisters have maintained that to provide this coverage would violate their religious beliefs.

After the Obama administration modified the rules as an “accommodation” for objecting organizations, the sisters held that even under the revised rules they would have to violate their consciences.

The majority of a three-judge panel for the Tenth Circuit Court of Appeals ruled in July that the Little Sisters of the Poor did not establish that the mandate was a “substantial burden” on their free exercise of religion, and thus ruled they still had to abide by the mandate.

“The Holy Father spoke to each of us individually, from the youngest postulant to our centenarian, and then he spoke to all us about the importance of our ministry to the elderly,” Sister Constance Veit, communications director for the Little Sisters of the Poor, said following the visit. “We were deeply moved by his encouraging words.”

Mark Rienzi, senior counsel at the Becket Fund for Religious Liberty, which is representing the Little Sisters of the Poor in their court challenge against the mandate, said in a email statement, “Today, after Mass at the Basilica, the Pope made an unscheduled visit to the Little Sisters of the Poor where he spoke to each of the Sisters privately and encouraged them in their vocation to serve the elderly and the poor. Earlier in the day, at the White House, the Pope expressed his support for religious liberty when he stated: [we] all are called to be vigilant, precisely as good citizens, to preserve and defend that freedom from everything that would threaten or compromise it.”

‘An Important Meaning’
The papal visit was not on the official schedule for Pope Francis’ Washington visit, which included Wednesday visits to the White House, a midday prayer service with the U.S. bishops at St. Matthew’s Cathedral, and the canonization mass for St. Junipero Serra at the Basilica of the National Shrine of the Immaculate Conception.

It was a “little addition to the program, but I think it has an important meaning,” Father Lombardi said.

Pope Francis, with President Obama at the White House, called religious freedom “one of America’s most precious possessions” and had hearkened to the U.S. bishops’ defense of religious freedom. “All are called to be vigilant, precisely as good citizens, to preserve and defend that freedom from everything that would threaten or compromise it,” he had said.

In response to the news of the visit with the sisters, Archbishop Joseph Kurtz of Louisville, president of the U.S. Bishops Conference, said that he was “so pleased” to hear of the visit.

“As you know the last thing the Little Sisters of the Poor want to do is sue somebody. They don’t want to sue in court,” he insisted. “They simply want to serve people who are poor and elderly, and they want to do it in a way that doesn’t conflict with their beliefs.”

The archbishop had previously warned against “interpreting freedom of religion in a very narrow way” in the press conference, and emphasized that religion is not something practiced just for an hour on Sunday but something lived out. To prove his point, he used the Little Sisters as an example.

Added Archbishop Kurtz, “We need to make room within our nation for people who have deeply held religious beliefs not to be forced to do that.”
Posted by Padre Steve at 7:03 AM