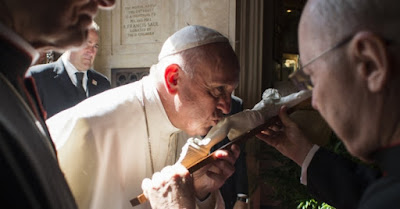 The following come from the NCR:

Pope Francis addressed the United Nations today.
He gave a speech that was entirely consistent with the address he gave the Joint Session of the United States Congress yesterday. It was also entirely different.
What do I mean by that?
Pope Francis is, first of all, a priest. He’s a pastor of souls. When he spoke to Congress, it was obvious that he was on a mission of pastoral mercy. He was not just addressing the members of Congress and other dignitaries in front of him; he was ministering to them.
Thus, his speech to the joint session was also a powerful pastoral intervention. He delivered a passionately pro-life speech that spoke of life from conception to natural death; that admonished us to care for our home, the Earth, and which repeatedly called for governance on behalf of the common good.
At root of all this was a deep pastoral message to the broken and wounded souls in that room. Pope Francis saw through the facade of power and puffery into their hearts of rage and self-righteousness. He walked into that room, aware of the imploding dysfunction that threatens to rattle our democracy, of the hardness of heart that blinds those who work there to everything but partisan loyalty.
I’m going to write in more detail about this in the future because what he said touched me to the core. As someone who has lived most of my adult life in the sphere of politics and who has held office for 18 years, it almost brought me to tears. Pope Francis did not see these people, as other usually do, as things with power. He saw them as what they are: Desperately wounded people who are afraid to do the right thing, even when they know what it is.
His address to the United Nations, even though it said essentially the same things about issues, was an entirely different animal. Pope Francis did not speak to the United Nations as a pastor so much as an advocate for humanity, standing before a tribunal of world leaders.
He spoke of the sanctity of life, of the pretense that there is no real difference between men and women, of the rights of women and of a world riven with violence, avarice, poverty and hopelessness. He spoke on the environment and he got rather specific in his suggestions as to what he thinks should be done in that area politically.
Despite the difference in tone, every word he spoke was entirely consistent with what he said to Congress, which was also consistent with what he’s been saying every day since we first heard Habemus Papam. Every word from his mouth echoed things that previous popes have said. Every idea he brought forward had one basis: The immense and eternal dignity of human beings, who are made in the image and likeness of the living God.
Pope Francis is the only person on the planet today who has both the will and the position to enter the halls of power and speak so plainly on behalf of suffering humanity to the power brokers who have created so much of this suffering. There are presidents, prime ministers, dictators and kings. But none of them wield the unique moral authority and independence from ambition of the pope.
Read the rest here.
Posted by Padre Steve at 11:30 AM