Pope’s triple marching orders to young people: "Go, do not be afraid, serve” 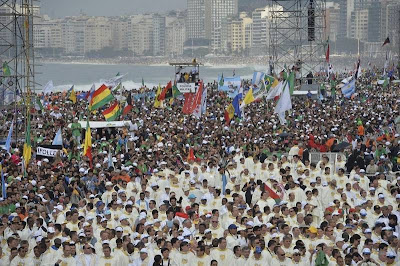 The following comes from the Vatican Insider:

Pope Francis set on fire the hearts of 3 million young people from 195 countries at World Youth Day (WYD) in Rio on Sunday, when he told them, with inspiring words, to bring Christ’s Gospel to all nations. By doing so, he said, “you are bringing God’s power to pluck up and break down evil and violence, to destroy and overthrow the barriers of selfishness, intolerance and hatred, so as to build a new world”

He gave them these final marching orders at the closing WYD mass on Rio’s breathtaking Copacabana beach, July 28.  It was the biggest mass ever celebrated on Latin American soil, and the second largest in WYD history.  It was memorable not only for the joyful Latin American music and the singing of Charismatic and other groups, but also for the emotional moment when a young Brazilian couple brought their newborn anacephalic (without a brain) daughter to the Pope at the offertory, as a gift to God.

As Francis spoke he could see, stretching before him along the waterfront, young people from all continents, cultures, languages, waving the flags of their nations.  400,000 had come from around the world, the rest were from Brazil.  Most had slept overnight in sleeping bags on the beachfront or on the street parallel to it. They had given him a rapturous, emotional welcome when he arrived in his partially covered jeep; they jumped up and down, danced and roared with joy as he passed among them blessing them and, at one point, even drinking mate offered by a pilgrim.

Speaking to them with passion, the humble Jesuit pope summarized his message in three points:  “Go! Do not be Afraid! Serve!”

“Go and make disciples of all nations”, he told them   This WYD had been “a wonderful experience”, he declared; they had “met Jesus” and “sensed the joy of the faith” with other young people, but now “you must go and pass on this experience to others”, because “Jesus is calling you to be a disciple with a mission!”

They must not keep this experience “locked up” in their own life, small parish group or movement, he said, “Because that would be like withholding oxygen from a flame that was burning strongly. Faith is a flame that grows stronger the more it is passed on, so that everyone may know, love and confess Jesus Christ, the Lord of life and history.”

They must share the Gospel with others, he said, because that is the command Jesus gives to the whole Church, “and that includes you”.  It is a command “that is born not from a desire for domination or power but from the force of love, from the fact that Jesus first came into our midst and gave his life in order to save us and to show us the love and mercy of God.”

He reminded them that “Jesus does not treat us as slaves, but as free men, as friends, as brothers and sisters” and “he not only sends us, he accompanies us, he is always beside us in our mission of love”.

Jesus “sends us to everyone. The Gospel is for everyone, not just for some”, he declared, as he urged them, “Do not be afraid to go and to bring Christ into every area of life, to the fringes of society, even to those who seem farthest away, most indifferent” because Jesus “wants everyone to feel the warmth of his mercy and his love”.

Pope Francis repeated, “Do not be afraid” to proclaim the Gospel even if they felt they had “no particular preparation”, because “when we go to proclaim Christ, it is he himself who goes before us and guides us” .Moreover, the whole Church and the saints in heaven will accompany them.

Finally, he told said, they are called “to serve” people because “the life of Jesus is a life for others. It is a life of service.” He reminded them that “Evangelizing means bearing personal witness to the love of God, it is overcoming our selfishness, and it is serving by bending down to wash the feet of our brethren, as Jesus did.”

He promised that if they followed his three key ideas - Go, do not be afraid, and serve, “you will experience that the one who transmits the joy of faith receives joy.” As he bade them farewell, he told them, “Jesus counts on you, the Church counts on you, the Pope counts on you”, and he said he looked forward to meeting them again at the next WYD in Krakow, in 2016.
Posted by Padre Steve at 5:15 PM