Pope Benedict: Voice of the Good Shepherd should be heard in priests 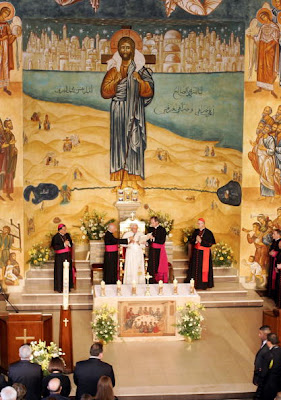 Pope Benedict XVI dedicated his weekly catechesis to the priestly duty of teaching the faith at today's General Audience. He told an estimated 35,000 people in St. Peter's Square that the duties of the priest, who acts in the person of Jesus, often put him in opposition to the popular culture.

Noting that the series of meditations in the general audiences during the Easter Season will all focus on the subject of the ordained ministry, the Pope used today's address to specifically focus on the priest's duty to teach, which is "so important for our times."

Explaining that priests act in the person of Christ and represent him, the Holy Father presented the three "munera," or duties, of teaching, sanctifying and governing. In exercising these three duties, priests carry out "the actions of the Risen Christ," the Pope taught.

The function of the priest, acting "in persona Christi," is to make the light of the word of God present in the world, he continued. And, it is not on himself that the priest is called to preach "but Jesus Christ and his revelation of the Father," the Holy Father said.

"This teaching, far from an abstract doctrine, is a living proclamation of the person of Christ, who is himself Truth, the source of our joy, peace and spiritual rebirth."

The whole life of the priest must therefore provide a testimony to truth of his message, "in harmony with the apostolic tradition and often in opposition to the spirit of the dominant culture," Benedict told the crowd.

Concluding his catechesis, the Holy Father reminded the faithful of the great task of the priest, "to be announcers of His Word, of the Truth that saves; being his voice in the world to bring that which is useful for the true good of the souls and the authentic path of faith."

The "voice of the Good Shepherd" should always be recognizable in a priest, he said.

Following the catechesis, the Holy Father sent out greetings in 10 languages, including words of comfort in Polish for the loss of their president and those who accompanied him. During the Italian greeting, he called for solidarity with the Chinese people after a 7.1 magnitude earthquake struck the city of Gyegu in the Qinghai Province and killed 400 people on Wednesday morning.