Priests recognized by Benedict XVI for being servants of Christ 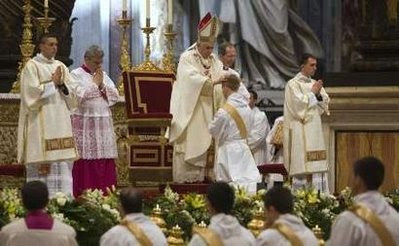 The Holy Father sent a special message to the priests of the world at Wednesday morning's general audience in St. Peter's Square. He dedicated a few words to a particular group of clergy represented there in person and expressed his "respect and deep recognition" for all priests.

During the individual language greetings on a mostly cloudy spring day in Rome, the Holy Father once again took the opportunity to recognize clergy as the ongoing Year for Priests unfolds.

In his Italian-language greeting, Pope Benedict welcomed priests from the Diocese of Rome, of which he is the bishop. The priests, led by Cardinal Vicar of Rome and auxiliary bishops, had just returned from a pilgrimage to Ars, France, the home of St. Jean Vianney, as an initiative for the Year for Priests.

Thanking them for their presence, affection and "spiritual closeness," Pope Benedict also expressed his "respect and deep recognition to (these) and to priests who all over the world dedicate themselves with apostolic zeal to serving the people of God, thus bearing witness to Christ's charity."

He encouraged them to be "patient and solicitous pastors" in the line of the Patron of Priests, St. Vianney, "for the good of souls."

The Holy Father also included a reminder that the World Day of Prayer for Vocations will be celebrated this coming Sunday.

Still speaking in Italian, the Pope concluded with special greeting to young people, the sick and newly married couples. He called on the youth to find their "personal answer to His design of love" in their dialogue with God, asked the sick to offer up their suffering for the maturity of "numerous and holy vocations" and exhorted the newlyweds to find the strength to build "an authentic Christian family" in daily prayer.
Posted by Padre Steve at 5:00 AM