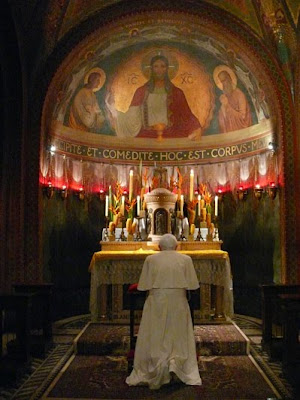 The following article of Fr. Frank Pavone comes from the NCR site:

God always blesses his Church with the type of leader it needs at each time in history. That was certainly true when the College of Cardinals elevated Cardinal Joseph Ratzinger to the papacy in 2005.

For the last 15 years, a key document for those of us in the pro-life movement has been Evangelium Vitae. Published by Pope John Paul II, it spoke of the “sacred value of human life from its very beginning until its natural end.” As prefect of the Congregation for the Doctrine of Faith, then-Cardinal Ratzinger played a major role in setting the tone for this encyclical that guides us to this day.

The process for producing the encyclical began with a consistory of cardinals called in 1991 by Pope John Paul. The future Pope Benedict presented a comprehensive report in which he said, “By allowing the rights of the weakest to be violated, the state also allows the law of force to prevail over the force of law.” He saw with perfect clarity that “the Church must make claims and demands on public law and cannot simply retreat into the private sphere.”

We accepted those words as a challenge. While every effort pro-lifers make on behalf of the unborn is significant, even sacred, we must understand that the only way to end abortion is in the political sphere. Here in the United States, that means overturning Roe vs. Wade. Pope Benedict has endorsed that effort in his writings since becoming Pope.

In 2005’s “God Is Love,” his first encyclical letter, the Pope asserts that “to say we love God becomes a lie if we are closed to our neighbor.” The pro-life movement is all about love for our neighbors, particularly those in the womb and those whose frailty or illness has pushed them to the margins of society. Later, he writes that the Church “cannot and must not remain on the sidelines in the fight for justice.” Our mandate could not be clearer.

When President Obama visited Pope Benedict at the Vatican last year, the Pope presented the president with two documents, the encyclical Caritas in Veritate and Dignitas Personae, a document on bioethics. A key point of the former document is that social justice cannot advance unless the right to life is protected. This is where pro-abortion politicians and parties so often get it wrong. They trumpet support for human rights, human development and social justice, but also think abortion belongs to those categories. In Dignitas Personae, the Pope reaffirms that just the opposite is true.

“Openness to life,” he writes, “is at the center of true development. When a society moves towards the denial or suppression of life, it ends up no longer finding the necessary motivation and energy to strive for man’s own good. If personal and social sensitivity towards the acceptance of a new life is lost, then other forms of acceptance that are valuable for society also wither away.”

I had the privilege of meeting the man who would be pope many times when I worked in Rome for the Pontifical Council for the Family from 1997 to 1999. As a cardinal and now as pope, Benedict XVI keeps his focus on pro-life issues. Those of us who work to protect the “least of our brothers” have a powerful leader indeed.
Posted by Padre Steve at 8:48 AM