Pray to Virgin Mary as ‘Queen of the Family,’ Pope Benedict tells Malta 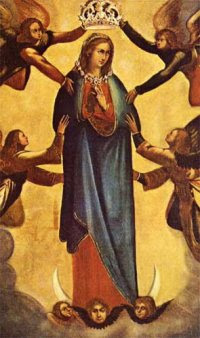 Together with the faithful in Floriana's Granaries Square, the Holy Father prayed the Regina Coeli in Malta on Sunday. Before the recitation of the Marian prayer with thousands of Maltese on Sunday, he acknowledged Malta’s particular devotion to Mary and presented a special gift to Our Lady of Ta' Pinu.

The prayer took place just after Sunday morning Mass celebrated in the same square, the largest on the island. For the celebration, a painting of the Virgin was brought to the square from the island of Gozo for the occasion from the Shrine of Our Lady of Ta' Pinu.

Recalling the Maltese tradition of trust in the Blessed Virgin Mary for protection and prayer intentions, the Holy Father recognized the "great fervor" with which the people of Malta express their devotion to the virgin.

Pope Benedict XVI said he was "pleased" to be able to pray before her image and presented her with a Golden Rose "as a sign of our shared filial affection for the Mother of God."

He asked that she be prayed to as "Queen of the Family," a title introduced by Pope John Paul II to the Litany of Loreto.

Benedict XVI used the occasion to express his gratitude to the people for everything, especially their strong devotion and prayers.

Following the Regina Coeli prayer, the Holy Father made a special Italian-language greeting to pilgrims from that country, asking that St. Paul be for them an example of “solid and courageous faith ...in all adversities."
Posted by Padre Steve at 9:55 AM