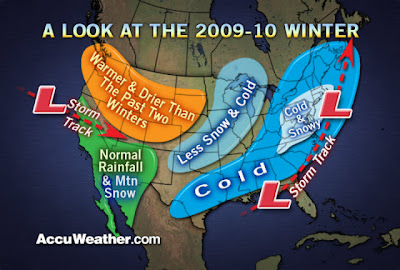 Maybe the farmers could check again? I really am not looking forward to a numbing cold winter! Here is the mind numbing story from yahoo news:
Americans, you might want to check on their sweaters and shovels — the Farmers' Almanac is predicting a cold winter for many of you.
The venerable almanac's 2010 edition, which goes on sale Tuesday, says numbing cold will predominate in the country's midsection, from the Rocky Mountains in the West to the Appalachians in the East.
Managing Editor Sandi Duncan says it's going to be an "ice cold sandwich."
"We feel the middle part of the country's really going to be cold — very, very cold, very, very frigid, with a lot of snow," she said. "On the East and West coasts, it's going to be a little milder. Not to say it's going to be a mild short winter, but it'll be milder compared to the middle of the country."
The almanac, which has been published since 1818, issues annual forecasts using a formula based on sunspots, planetary positions and the effects of the moon.
This winter, the 200-page publication says it'll be cool and snowy in the Northeast, bitterly cold and dry in the Great Lakes states, and cold and snowy across the North Central states.
It says the Northwest will be cool with average precipitation, the Southwest will be mild and dry, the South Central states will be cold and wet, and the Southeast will be mild and dry.
The almanac's forecast, however, is at odds with the National Weather Service, which is calling for warmer-than-normal temperatures across much of the country because of an El Nino system in the tropical Pacific Ocean, said Mike Halpert, deputy director of the NOAA Climate Prediction Center in Camp Springs, Md.
"The stronger El Nino becomes, the more confident and the more likely it will be the northern part of the country will have a milder-than-average winter," Halpert said.
The almanac and the Weather Service agree on their predictions of warmer-than-usual conditions across much of the country next summer.
The Farmers' Almanac, not to be confused with the New Hampshire-based Old Farmer's Almanac, has a circulation of about 3.5 million.
Posted by Padre Steve at 7:25 PM

They predicted a really hot, record-heat-and-humidity summer for us...and it's actually been a very cool summer. Perfect, actually. I can't remember EVER having such a beautiful summer!