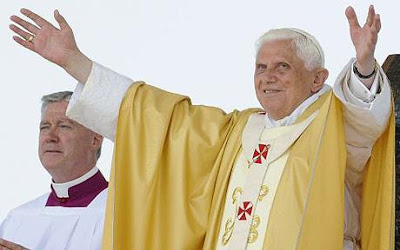 In a video message to an international spiritual retreat for priests at the French shrine of Ars, Pope Benedict XVI said that priests’ work is irreplaceable and that the Church’s recognition for their “unreserved” commitment is “immense.”

The retreat, marking the 150th anniversary of the death of St. John Mary Vianney, is scheduled for September 27 through October 3. Cardinal Christoph Schonborn, Archbishop of Vienna, is the preacher of the retreat, whose theme is “The joy of being a priest, consecrated for the salvation of the world.”

In his video message to the priests, made public on Tuesday, Pope Benedict said that the priest is “called to serve human beings and to give them life in God… He is a man of the divine Word and of all things holy and, today more than ever, he must be a man of joy and hope. To those who cannot conceive that God is pure Love, he will affirm that life is worthy to be lived and that Christ gives it its full meaning because He loves all humankind.”

The Pope then turned to priests who serve a number of parishes, saying they commit themselves “unreservedly” and that the Church’s recognition for them is “immense.”

“Do not lose heart but continue to pray and to make others pray that many young people may accept the call of Christ, Who always wishes to see the number of His apostles increase,” he added.

Pope Benedict asked the audience to consider the extreme diversity of the ministries they perform, such as the large number of Masses they celebrate “each time making Christ truly present at the altar.”

“Think of the numerous absolutions you have given and will give, freeing sinners from their burdens. Thus you may perceive the infinite fruitfulness of the Sacrament of Holy Orders. Your hands and lips become, for a single instant, the hands and lips of God,” he reflected.

Such thoughts should ensure “harmonious relations” among the clergy to help build up the body of Christ and consolidate them “in love.”

“The priest is the man of the future,” he said.

“What he does in this world is part of the order of things directed towards the final Goal. Mass is the only point of union between the means and the Goal because it enables us to contemplate, under the humble appearance of the bread and the wine, the Body and Blood of Him Whom we adore in eternity.”

“Nothing will ever replace the ministry of priests in the heart of the Church,” Pope Benedict’s message continued. He called priests “the living witnesses of God's power at work in the weakness of human beings, consecrated for the salvation of the world, chosen by Christ Himself to be, thanks to Him, salt of the earth and light of the world.”