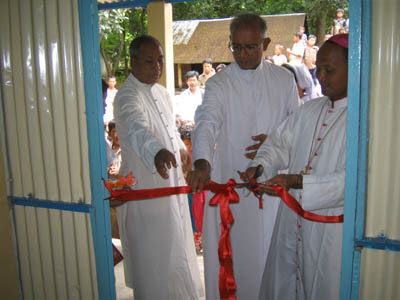 The Salesians have a new presence in Bangladesh! Our Rector Major, Fr. Pascual Chavez, speaks of our moving into "new frontiers" and developing works with the poorest of young people. Let's pray for the success of this new project! The following comes from the Salesian News Agency:

At the conclusion of the 26th General Chapter of the Salesians of Don Bosco, the Rector Major, Fr Pascual Chavez announced that as a concrete expression of the commitment of the congregation to open new frontiers, the Salesians would go to work in Bangladesh, one of the poorest countries in the world. One year later this promise has become reality. From 24 March 2009 the Salesians are present in Bangladesh and are already in the act of establishing their first presence in this country.
From 1928 the Salesians were working in the districts of Jessore and Khulna, then part of the diocese of Krishnagar. After the partition of India and the creation of East Pakistan in 1947, they continued to work in these places till 1952. Then they withdrew to the Indian part of Bengal, entrusting the pastoral work to the care of the missionaries of St Francis Xavier (the Xavarians).

In 1971 East Pakistan became an independent country and was renamed “Bangladesh”. The opening of the first Salesian presence in this country is at the same time an answer to the repeated requests of the Bishops for the presence of the Salesians as well as the launching of a new apostolic frontier on the occasion of the 150th anniversary of the founding of the Salesian Society which occurs on 18 December 2009.

The challenges that this new mission presents are indeed many. In summary, they are the challenges of evangelization in the modern context and more specifically in a strongly Muslim environment. Precisely because of this Bangladesh becomes a new frontier for the Salesians.

As far as religion is concerned, 87% of the population of this country is Muslim. Among them there is no lack of extremists who are keen on introducing the Sharia in the whole country. The Hindus are some 10%. In the remaining 3% are included also the Christians who hardly reach 0.35% of the total. The Catholics are hardly 300,000 in a population of 150 million.

In such a context evangelization requires a serious commitment to inter-religious dialogue as well as attention to the renewed evangelization of those already baptized because the Christian life of the faithful is in need of a great leap in quality.

From the social point of view, 97% of the population is Bengali. The rest are composed of different ethnic minorities and indigenous tribes which can be found also in India. These tribes are being increasingly marginalised and in a certain sense much exploited by the majority population. They do not have the same opportunities for development and self affirmation like the others.

The phenomenon of poverty and misery is a stark reality for the vast majority of the population of Bangladesh. Official statistics notwithstanding, the daily income of a good percentage of people is between 1.5 and 3 Euros. Periodic natural calamities compound the problems of misery. The absence of economic reserves makes the people incapable of repairing the losses caused by these disasters.

Illiteracy and inaccessibility to a good education complete the precarious social condition of the majority of the population in this country, and in particular of the economic minorities.
In this situation the Salesians have much to offer precisely because evangelization and education are the two interconnected poles of the Salesian charism. We have come to this country to offer the young people and the poor in general the hope of a better tomorrow that is more human according to the Christian vision of life. 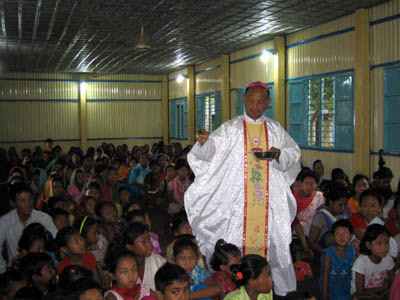 The first Salesian presence is at Utrail in the diocese of Mymensingh. It is situated in the Netrokona civil district, 55 KM to the north of the city of Mymensingh. Netrokona is one of the more underdeveloped districts in Bangladesh. Because of the lack of some bridges which were washed away over the years in successive floods, the journey between Mymensingh and Utrail is a true adventure of patience and hardships lasting several hours.
At present the principal beneficiaries of the Salesian mission are the ethnic group called Mandi (Garo) and the poor children and youth of all the groups in the region. In a few months’ time a new parish among the Mandi will be entrusted to us. We are now engaged in pastoral work with the accent on new evangelization and the social “empowerment” of the faithful.

The diocese has handed over to us a free primary school named after St Francis Xavier. 270 poor children from Christian, Hindu and Muslim families attend this school. Every effort is being made to upgrade the standard of this school. The very first requirement for this is a proper school building. Through various educational initiatives for the poor children and the youth we have a plan to improve the overall social standing of the minorities and of the poor, in order to bring them on a par with the others. For this purpose we are still in search of a large piece of land. This is indeed a very ambitious dream, but for the sons of a great dreamer, with the help of God and the intercession of Mary Help of Christians, this dream will become reality day by day.
Posted by Padre Steve at 8:30 AM