The following comes from Archbishop Chaput of Philadelphia: 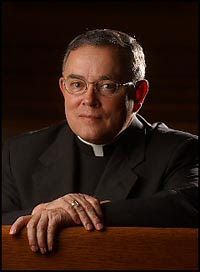 Archbishop Charles Chaput
Earlier this week we celebrated Memorial Day. For most of us, the holiday informally marks the start of summer. Over the next three months families will take their vacations, the pace of life will slow a bit and people will have a little more precious time to relax and restore their spirits.
The purpose of recreation is to renew us in body and soul; to give us time to think; to reconnect us with family and the gift of being alive. For me, that usually means a week of fishing with friends, catching up on a pile of good books and enjoying a few good movies.
And since all good things are meant to be shared, I can already recommend — in fact, enthusiastically recommend — a film that no Catholic should miss this summer.
“For Greater Glory” opens in select theaters this Friday, June 1. Written, directed and acted with outstanding skill, it’s the story of Mexico’s Cristero War (also known as La Cristiada, 1926-29). Largely ignored until recently – even in Mexico – the war resulted from Mexico’s atheist constitution of 1917, subsequent anti-religious legislation and fierce anti-clerical persecution by the government of President Plutarco Elias Calles, who came to power in 1924.
The Catholic response to the Calles regime first took the form of non-violent petitions, suspended religious services and economic boycotts. But bloody popular resistance broke out in 1926. By 1929, 50,000 Cristero rebels were fighting the federal government. A small number of priests took up arms with their people. More than 90,000 persons died in the fighting. In the process, the authorities murdered thousands of Catholic laypeople and dozens of priests.
Blessed Miguel Pro, a Jesuit priest, was executed without trial in 1927. Blessed Jose Sanchez del Rio, age 14, was shot to death for refusing to deny his faith in 1928. In both cases, the martyrs’ last words were Viva Cristo Rey! (Long live Christ the King!) The Church has since honored dozens of other Mexican martyrs for their heroism during the Calles persecution.
By 1929, pressured by Cristero success and U.S. diplomacy, federal authorities agreed to ease some restrictions on the Church and end violent persecution. Mexico’s bishops accepted the brokered peace. The Cristero rebellion slowly died out. But the government soon betrayed its promises. Brutal anti-religious policies renewed and continued.
Federal authorities murdered hundreds of former Cristero leaders and thousands of former Cristero fighters in reprisals. And the government continued its belligerence against the Church throughout the 1930s – a campaign of atheist violence and anti-religious hatred that provided the backdrop for two of Graham Greene’s finest books: his travelogue, “The Lawless Roads” (1939), and arguably his greatest novel, “The Power and the Glory” (1940).
Of course, gripping history does not automatically translate into good drama. Too many films for the family and religious markets suffer from lots of good intentions, but a lack of resources, inadequate talent and weak professional skills.
“For Greater Glory” succeeds where so many similar films have failed. Led by Academy Award nominees Andy Garcia and Catalina Sandino Moreno, along with Oscar Isaac, Eva Longoria, Ruben Blades, Eduardo Verastegui and others, the cast is superb. And the writing gives them the kind of robust material they need to work with: strong dialogue, fully developed characters, vivid moral conflicts in a time of revolutionary violence and a compelling story that never lags, thanks to the skilled directing of Dean Wright.
To describe this film as stirring or powerful would do it a disservice. “For Greater Glory” is much more than an exercise in piety; it’s an extraordinary portrait of ordinary people struggling to defend their convictions. It’s among the most absorbing films by any director or movie studio that I’ve seen in the past few years.
One of the hymns Cristeros sang as they went into battle had these words:

We Americans in 2012 live in a different land in a different time. We’re blessed with freedoms the Cristeros could only imagine. But those freedoms depend on our willingness to defend them. Religious liberty is never guaranteed by anything but our own vigilance. Even in this country, contempt for religious faith, and especially the Catholic faith, is alive and well.
“For Greater Glory” captures with memorable power and grace where that bigotry can lead — and the cost of resisting it.