Theology and "The Avengers" 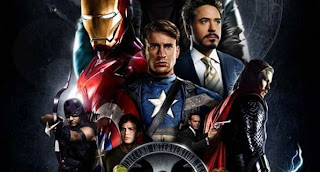 The following comes from the Crisis site:

The Avengers, who some are saying is the best “Super-Hero” movie of all time, shattered the box-office on its opening weekend. It is a highly entertaining, action packed, funny movie that brings together some hi-profile actors and some legendary comic-book characters.
The movies premise, as with most “Super-Hero” films, is global domination by a dark villain. What makes it unique is not only it’s depth of characters and depth in 3-D, but it’s depth in meaning. The movie is most meaningful in dealing with the redemption of the characters, the effect that redemption has on the entire world, and the community that is formed.

Nick Fury, played by the inimitable Samuel L. Jackson, draws from a team of absolute “misfits” to help save the world from Loki and his army. The movie begins with the voice of Nick Fury narrating: “And there came a day, a day unlike any other… when Earth’s mightiest heroes found themselves united against a common threat… to fight the foes no single superhero could withstand… on that day, The Avengers were born.”

When the actors were interviewed on the set last summer, almost every one of them said the defining thing about their character is that he or she is “desperately lonely.” Scarlett Johansson who plays the black widow admits: “Yeah, we all have a little bit of trauma.” Chris Evan’s who plays Captain America affirms that “Everyone has their own baggage, and that’s why it was an uphill battle to try to marry the conflict of all these individual characters.”

Tony Stark, Robert Downey Jr.’s always hilarious and sarcastic character, enters into a dialogue with Loki warning him of their team: “The Avengers. It’s what we call ourselves, sort of like a team. “Earth’s Mightiest Heroes” type thing… Yeah, takes us a while to get any traction, I’ll give you that one but, let’s do a head count here. Your brother, the demi-god; a super soldier, a living legend who kind of lives up to the legend; a man with breath-taking anger management issues; a couple of master assassins, and YOU, big fella…” The Avengers, much like the Christian community, is nothing more nothing less than a group of saints and sinners.

The set-up is the classic scape goat theory… with Loki as the scapegoat who if killed will bring peace. However, as is true in our plan of redemption, what ultimately brings people together is not the common enemy, but the redemption of each individual heart, the way that one conversion can impact many others, the healing that takes place in community which brings about the salvation of the world.

Redemption of the Character

As Tony Stark so succinctly put it each hero embodies great potential but the reality is it does take them a while to get any traction. Conversion is a process and often a life-long one. Before they are brought together in community their powers are unwieldy. They are each very broken individuals. Iron Man’s narcissism keeps him from any real intimacy with love interest Pepper Potts. Thor is constantly fearful of his power to call down the lightning. Captain America is still living in World War II. Black Widow has very deep stuff going on in her past. Hawk Eye has become a slave to Loki’s staff and has lost his ability to think for himself. This leaves us with The Hulk, whose wound is so deep and conversion is most evident.

The Hulk, as compellingly played by Mark Ruffalo, is a man at war with himself. In one scene where mass destruction is evident Captain America says to Bruce Banner (Hulk’s alter-ego): “Doc… I think now is the perfect time for you to get angry.” Bruce replies: “That’s my secret Cap, I’m always angry.” Isn’t this true for all of us? Our core sins are always present lurking in the background. He alludes more and more to this throughout the movie of what he describes as his “other self.” This phrase is actually used! It’s straight out of Saint Paul and so often referenced by the mystics.

St. Francis de Sales once gave the following advice to an aspiring nun: “My dear daughter, stir up your courage, arm yourself with the patience we should have toward ourselves. Often rouse your heart so that it may be rather on guard against a surprise attack; watch out for this other self; wherever you go, you’d do well to be aware of her, for this mean girl goes with you everywhere, and if you aren’t thinking about her she will think up something against you. But when she happens to attack you suddenly, even if she causes you to totter and stumble, don’t be upset; instead, call out to our Lord and our Lady. They will reach out a blessed helping hand to you, and if they allow you to go on suffering for a while, it will only be in order to have you cry out again more loudly for their help. Don’t be ashamed of all this, my dear daughter, any more than St. Paul who confesses that there were two men in him—one rebellious toward God, and the other obedient” (Romans 7:15-23). As with St. Paul, the aspirant, the Hulk and ourselves, we all have this “other self.”

Bruce Banner begins to come to terms with his other self when he and Thor are in the middle of melee “Seeing who is better” and they are interrupted by a fighter jet. Hulk was beginning to lose it and endanger everyone around him when Thor says to him: “We are not enemies… try to think.”

Thor is giving the same advice that St. Francis gave to the young postulant. “Try to think… be aware.” This is a moment of spiritual direction that brings about conversion. Hulk who has been so ashamed and tormented by his other self is now learning, not simply to bury it, but to allow it to be redeemed and transformed. In his own personal moment of salvation, it leads to not only the salvation of those around him, but to the salvation of the world.

In the square outside of a concert hall in Germany Loki takes over a crowd. He threatens and demands that they worship him. “Kneel before me. I said… KNEEL! Is not this simpler? Is this not your natural state? It’s the unspoken truth of humanity that you crave subjugation. The bright lure of freedom diminishes your life’s joy in a mad scramble for power. For identity. You were made to be ruled. In the end, you will always kneel.” An elderly man with a German accent is heard from the fearful, kneeling crowd: “Not to men like you.” Loki responds: “There are no other men like me.” The elderly man stands and says with sad strong eyes: “There are always men like you.”

This frail, elderly, weak man stands up and refuses to kneel to a god. Courage begins to stir and there is a dialogue between Black Widow and Captain America about standing up to Loki. Black Widow’s alter eagle Natasha says to Captain America’s alter ego Steve Rogers fearfully: “But he’s a god!” Rogers responds confidently and boldly: “Ma’am, there’s only one God, and I’m pretty sure he doesn’t look like that.” As Saint Paul once declared: “We must obey God rather than men” (Acts 5:29). When we renounce our idols and futile attempts to be God and allow ourselves to be redeemed it will bring about the redemption of many.

The conversion of each character benefits the others

The personal redemption that is happening in each one of them is not solely for their own good, but it is for building up the gifts of the community.

There is a shift in the Avengers when Hulk begins to use his rage for good. In this buildup there is comic relief when Hulk and Loki are fighting… there is a moment of absolute stillness and Loki declares: “I am a god! I am not going to be bullied by a… [Hulk interrupts, grabbing him by the legs and in classic Hulk style smashes him side to side back and forth leaving him stunned and confused clearly defeated and lying on the ground]… Hulk struts away and mumbles… “Puny god.” (The theater bursts with laughter).

What seemed to be his greatest weakness and kept him in such shame and isolation had actually been set free through the care and direction of others. It never would have happened without this team that had been formed. These vigilantes who were hell bent on destroying themselves and each other had come to know their true selves, accept their weaknesses, and be nurtured to master their vices and shape their virtues. One by one they all begin to become transformed by the others individual conversions.

Director, Joss Whedon, explains that “The Avengers is about bringing all of these isolated characters into community. The way to work their problems out is to give themselves to something that matters more… There was an idea to bring together a group of remarkable people so that when we needed them they could fight the battles that we never could… It’s about the idea – which is very old-fashioned – of community, of people working for each other. That’s gone away. The Avengers, for me, is about bringing that back.” Whedon goes on to describe that the characters, who are so ego driven, must “put aside their individual interests and objectives. The first half of the film is about them trying to fulfill their own goals, and that doesn’t work out too well. They end up destroying things – and each other. Any community or family can’t be defined by an individual. It’s by the actions of the group.”

What is revealed is that in the end, maybe it’s not so much about evil being conquered or being destroyed, but community being formed. There is conversion of each character and that redemption is not only for their good but benefits the greater good and out of this community is formed. And here is where we have the moment of truth – it is in that community that redemption is fostered.

Isn’t this what the prophets, mystics, saints and martyrs have proclaimed over the years? Jesus invites us into this redemptive plan and into the community that is formed around the Eucharist. Our redemption is found in the love and the support of the community. Though we may be tempted to hide our weaknesses, dwell isolated in our shame, mask what most disgusts us, it is only when it is brought to light in community that we can be healed. This healing is not only for ourselves but for the salvation of all. And the salvation of all is found in the community that is formed around the Altar of our Lord.
Posted by Padre Steve at 5:00 AM