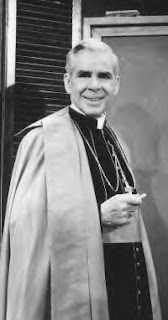 The following comes from NCR:


Servant of God Archbishop Fulton J. Sheen is now “Venerable” after the Vatican announced today that Benedict XVI had signed a decree recognising that the archbishop heroically lived Christian virtues.

The announcement  of the decree marks a significant step in the canonization cause of Peoria, Ill.-born Archbishop Sheen (1895-1979), the Emmy award-winning televangelist whose program, "Life is Worth Living," was broadcast from 1951 to 1957.

The Vatican now has to recognise a miracle has occurred through his intercession for him to be beatified, the penultimate step to canonization.  Alleged miracles have been reported, which are now being assessed by experts in Rome.

For little over a year, the Congregation for the Causes of Saints has been examining his cause based on volumes of Archbishop Sheen’s life gathered in his home diocese of Peoria. The Congregation will have first examined if the archbishop had shown evidence of the three theological virtues of faith, hope and charity, and then the four cardinal virtues of prudence, justice, fortitude and temperance.

Theologians and cardinals will then have confirmed that he did indeed practice heroic virtue, leading the Holy Father, with the aid of the Consulters from the Congregation, to declare him "Venerable". Now that the Pope promulgated the decree of heroic virtue, the former bishop of Rochester, NY, may now be
venerated by all the faithful.