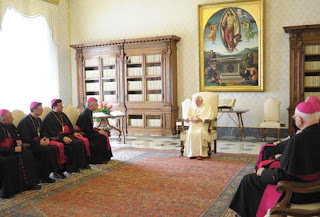 Vatican City, Jun 5, 2012 / 04:02 am (CNA/EWTN News).- The priest behind the recent “ad limina” visits of America’s bishops to Rome says that Pope Benedict has called on the U.S. Catholic Church to help rescue and revive Christian culture.

“The Holy Father spoke of the challenges in marriage, in family life, in growing secularization, in education, but I think there was a common theme amidst all the challenges: that where God does not exist, where he is taken out of culture, civilization itself begins to disintegrate,” Monsignor Anthony J. Figueiredo told CNA in Rome.


Over the past six months Msgr. Figueiredo has led the organization of 15 visiting delegations from the US consisting of 258 bishops.


“It was a very, very intense time of serving these bishops, really allowing them to feel that Rome was their home away from home, and I must say that they went back really very positive for a number of reasons,” he said.


“Ad limina” visits usually occur every five to seven years and give the episcopate a chance to speak with the Pope and Vatican officials about the health and future of the Church in their diocese.


“The most important part of the Ad Limina visit is not so much the administrative tasks, even though these are important, but really to come here and to pray,” he said.


It was therefore one of Msgr. Figueiredo’s key tasks to make sure that each delegation were able to say Mass at Rome’s four papal basilicas. That included making pilgrimages to the tombs of St. Peter and St. Paul.


He was also the point-man with the Vatican when arranging Papal audiences for each of the delegations. These meetings, he said, allowed the bishops “to be confirmed in the mission that is entrusted to them, which is really an apostolic ministry given them by the Holy Father himself.”


Although born and bred in England Msgr. Figueiredo, or “Fr. Anthony” as he usually refers to himself, is a priest of the Archdiocese of Newark. For the past six years, though, has been based in Rome.


That transatlantic overview means that while he believes European culture as becoming increasingly secularized “there still exists a window of opportunity in the United States” to save Christian culture.


“If God is taken out of the equation, this is what the Holy Father was saying, then the human person has no human dignity,” he said, “and we can do with the human person whatever we feel should be done to him or to her regardless of him or her being made in the image and likeness of God.”