He Must Increase: Reflections on the Birth of John the Baptist 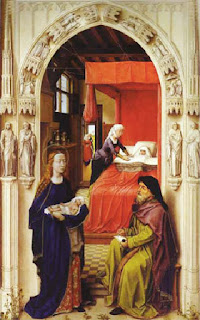 The following comes from Scott Hahn:
The people in this week’s Gospel are frightened and amazed by the mysterious events surrounding the birth of John.
Only his mother and father, Elizabeth and Zechariah, know what this child will be.
John the Baptist was fashioned in secret, knit by God in his mother’s womb, as we sing in this Sunday’s Psalm. From the womb he was set apart, formed to be God’s servant, as Isaiah declares in this week’s First Reading.
The whole story of John’s birth is thick with Old Testament echoes, especially echoes of the story of Abraham. God appeared to Abraham, promising that his wife would bear him a son; He announced the son’s name and the role Isaac would play in salvation history (see Genesis 17:1, 16, 19).
The same thing happened to Zechariah and Elizabeth. Through his angel, God announced John’s birth to this righteous yet barren couple. He made them call John a special name—and told them the special part John would play in fulfilling His plan for history (see Luke 1:5–17).
As Paul says in today’s Second Reading, John was to herald the fulfillment of all God’s promises to the children of Abraham (Luke 1:55, 73). John was to bring the word of salvation to all the people of Israel. More than that, he was to be a light to the nations—to all those groping in the dark for God.
We often associate John with his fiery preaching (seeMatthew 3:7–12). But there was a deep humility at the heart of his mission. Paul alludes to that when he quotes John’s words about not being worthy to unfasten the sandals of Christ’s feet.
John said, “[Christ] must increase. I must decrease” (John 3:30).
We must have that same attitude as we seek to follow Jesus. The repentance John preached was a turning away from sin and selfishness and a turning of our whole hearts to the Father.
We must decrease so that like John we can grow strong in the Spirit, until Christ is made manifest in each of us.
Posted by Padre Steve at 4:00 AM