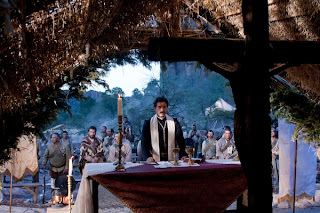 The following is a review of "For Greater Glory" by a Carmelite Sister:

We rarely go to a movie theatre. Yet, a once-in-a-lifetime opportunity was offered my community, the Carmelite Sisters of the Most Sacred Heart of Los Angeles, to be a part of a premiere showing of "For Greater Glory" on May 31st in Beverly Hills. 75 of our sisters immediately said "yes" to the gracious invitation of Archbishop Jose Gomez. Why? Because it was during those days, the days of the horrendous religious persecution in Mexico in the 1920s that our community began. Mother Maria Luisa Josefa of the Most Blessed Sacrament, affectionately known as Mother Luisita, had already accepted 55 sisters into the new community

It was on July 31, 1926, that President Plutarco Elias Calles enforced the anti-clerical laws throughout Mexico. The following day, August 1, 1926, all religious services were stopped throughout Mexico. No more Masses. No more marriages. No more first Communion. No more religious practices of any kind. This is where the movie begins. And that is why we are so interested. Our community was just beginning at that time also.


Regular folk, people like you and me, felt the loss of their religious freedom all the way to their deepest soul. In the region of Los Altos, where my community and the cristeros originated, a new group formed made up of these Catholics who protested the law. There was a boycott. There was a petition. When all these failed, there rose up a group known as "cristeros" who fought for three years to reclaim their churches and their religious freedom.


Now I had read about the cristeros, researched the elements of the persecution in Mexico, and a few times I've given talks on the beginnings of our community. I had read about how some of our first sisters had been put in jail. I had heard about sleeping on mats and having to get up at a moment's notice and take all belongings and escape over roof tops to safety. I had read coded letters in which our holy foundress, Venerable Mother Luisita, wrote in detail about current fashions. She was a very simple and austere soul and wore only a mended Carmelite habit. I used to think why such detail about current women's fashions, for heaven's sake. Well after seeing the movie, I understood. It was for the sisters to wear a better disguise so they would not be discovered and arrested. After I saw the movie, "For Greater Glory", it all became real to me. The blood. The torture. The injustice of it all. Above all, the faith of the people. What faith!


Some of you reading this column might know us, because your child is in one of our schools, or a family member is in one of our health centers. Or perhaps you participated in one of our retreats we offer. But, today, in this column you will learn more. Our community was born in religious persecution. Our first sisters and the people who stood by them were courageous, strong Catholics. When Mother Luisita arrived by train into the United States in June 1927, she stepped down from the train and kissed the ground of a free country with religious freedom She could wear her Carmelite habit.


Groups of sisters remained in Mexico, hidden by families who knew they would be killed if the Sisters were found in their homes. That's how our schools stayed in session during those dark years, with private lessons and small group lessons which took place in private homes. Our sisters following Mother Luisita's example became beacons of hope and helped God's people deepen their spiritual resources through prayer. That is our mission, "to promote a deeper spiritual life among God's people" Our mission is aimed at fortifying each one of you with the spiritual intimacy with God that will give you strength in hard times.


I urge you to see the movie "For Greater Glory" and when it is over, like me, you will probably see some parallels. Viva Cristo Rey! (Long live Christ the King!)