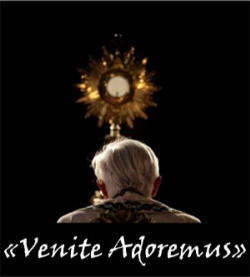 If you are like me then you love to hear good news about vocations! This is a story about the affect of eucharistic adoration on the young people of Uganda. We need to encourage more and more of this in our own country as well! The following comes from the Catholic Online site:

Adoration of the Blessed Sacrament in Uganda is attracting more and more lay people to prayer and encouraging vocations to the religious life.

Speaking to Catholic charity Aid to the Church in Need (ACN), nuns from two separate contemplative orders described how prayer before the Eucharist was proving increasingly popular. Sister Consolate Shirima, of the Sisters of Perpetual Adoration, in Arua, on Uganda’s north-west border, described how over the last five years increasing numbers of lay people have been joining the Sisters for adoration.

Sister Shirima said that the number of visitors to the chapel throughout the day has led the order to appoint a Sister to look after the laity coming to adoration. She went on to say that another 300-400 join the monastery for prayers on Sundays. The nun said, “They come for adoration on their own at any time they want to. There are some hours where you find two or sometimes three people or even groups of 10.”

Holy Trinity Monastery, where the Sisters of Perpetual Adoration are based, has now become too small to house the increasing number of nuns. Sr. Shirima said, “Still the number is growing, but because of the lack of rooms we have to turn people away, so we are looking to extend the monastery.”

Aid to the Church in Need will be helping with a grant of just over $7,000, enabling the Sisters to extend their small monastery and allow new-comers to join the community including 12 professed nuns and one novice. The modest size of the community is considered enormous in Africa where contemplative orders are generally very small most are joining active apostolates instead.

According to the nun, one reason people come is they are seeking solace in prayer because of the difficulties and poverty in the local area. She said, “When you have problems you are easily drawn to God through adoration, some of them get consolations, even though these may be small.”

Sr. Shirima also described how the impact of AIDS in Uganda had contributed to much of the suffering. The nun said, “Poverty comes because people have died from AIDS leaving children living with their grandparents….Usually in Africa we have large families with up to 10 children, now because of deaths from AIDS you find one person bringing up over 20 children.”

Alcohol and drug-taking are also among the problems facing local people. “They have completed school, but there is a lack of employment, so they get frustrated,” said Sr. Shirima, “And out of frustration they turn to drink and drugs.”

Sr. Marie Claire who comes from another congregation, the Benedictine Nuns of the Blessed Sacrament, described the calming effect of prayer on worshipers. She said, “After adoration they feel peace, and when they have been having wrangles they would like to be reunited.”

The Sister continued, saying, “So after an hour of adoration they feel that they want to make peace with that person. They feel the Eucharist makes them reunited with others and the whole Church that is what they say they feel when they come before the Blessed Sacrament….Some come afterwards and say, ‘Yes, I am now alright with my brother/husband/wife who has not been talking to me for two or three days’ they continue with real life in peace.”

Not only in Uganda but across the African continent adoration is growing in popularity, and in Kenya and Dar es Salaam, Tanzania, new adoration chapels have been built.

In addition to the $7,000 for the extension of Holy Trinity Monastery, ACN has, since 2000, supported 359 projects in Uganda totaling over $4.2 million including Church-run AIDS awareness programs. Last year, ACN supported 69 projects across the country totaling $919,357.
Posted by Padre Steve at 5:21 AM

It is true that Our Lord calls to us, especially in Eucharistic Adoration because he is truly present in The consecrated! this is great for Uganda!! now we just need to get people in America to pray before our Lord in the Blessed sacrament!