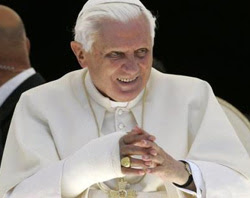 This is the whole story of the Holy Father's injured wrist! The news comes from CNA:

Pope Benedict XVI said today that his guardian angel did not prevent him from fracturing his wrist earlier this month. He suggested his angel was “certainly following superior orders” in order to use the accident to teach him humility and to provide him with more time for prayer.

Speaking at the Alpine resort Les Combes, where he tripped and injured his wrist ten days ago, the Pope thanked law enforcement officials for being “like angels” in their response to his accident.

"Unfortunately, my own guardian angel did not prevent my injury, certainly following superior orders," Pope Benedict said, according to the Associated Press.
Posted by Padre Steve at 11:47 AM