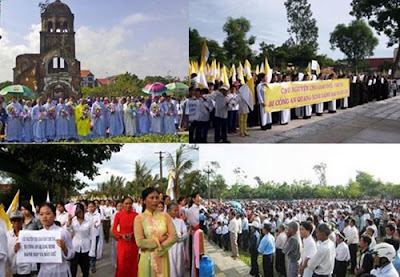 Please pray for the Church in Vietnam as things seem to be deteriorating. Please pray especially for Fr. Peter Nguyen who is critical condition after being beaten by plain-clothes police and a government paid mob. The following comes from CNA:

Two priests were hospitalized in the central Vietnamese coastal city of Dong Hoi after being beaten brutally by plain-clothed police and a gang employed by the local government. One of the priests, who is now comatose, was thrown from the second floor of the hospital where he was visiting the first victim.

On Sunday, Fr. Paul Nguyen Dinh Phu, parish priest of Du Loc, was attacked by a group of plain-clothed police and thugs when he was travelling to Tam Toa parish to concelebrate morning Mass with five other priests of Trooc Deanery.

At 7 a.m. that morning, 170 priests and 420 women religious led hundreds of thousands of Catholics from the Diocese of Vinh and neighboring dioceses in peaceful protests throughout Vinh's 19 deaneries. The protesters were demanding justice for victims assaulted by police on July 20 as they were trying to rebuild their place of worship at Tam Toa parish. Seven of the Catholics arrested by the police on July 20 remain in custody.

On their way to protest at Tam Toa with the Trooc Deanery on Sunday, three Catholic women were beaten by a group of men. Fr. Paul Nguyen reported that he tried to intervene to rescue the women.

“Before I could open my mouth, they left the women and turned on me as they recognized me as a Catholic priest,” he said. “They kicked me brutally.”

“There were at least 30 police in full uniform standing nearby,” the priest added, but “they looked indifferently at the attack.”

The gang kicked Fr. Paul Nguyen in his ribs, in his face, and on his head until a group of Catholics managed to rescue him and take him to a nearby hospital.

The gang returned to the hospital with more people and more weapons. They have since surrounded the hospital, Fr. An Dang says.

The Bishop of Vinh’s office made an urgent complaint to the People’s Committee of Quang Binh and asked Fr. Peter Nguyen The Binh, pastor of the close by parish Ha Loi, to accompany Tran Cong Thuat, Deputy Governor of Quangh Bin, to visit the injured priest.

Fr. An Dang tells CNA that during the visit to the hospital, Thuat secretly withdrew. When he left, the gang jumped on Fr. Peter Nguyen and cruelly beat him before throwing him from the second floor of the hospital.

Fr. Peter Nguyen is presently in critical condition in a coma and is not responsive.

For more on this story click here.
Posted by Padre Steve at 4:29 PM