Tim Tebow, Faith and the Media


I am an avid LSU Tiger fan and I hope we beat the Gators on October 17, but it is hard not to pull for Tim Tebow. This committed young Christian doesn't shy away from living his faith despite the great pressures put upon him by the press. I found this at the Get Religion site:

If you are a college sports fan of any kind, then you already know about Tim Tebow, the muscular Christian who plays quarterback for the University of Florida Gators. He’s already won the Heisman Trophy and two national titles and now he’s back again as a senior, trying to build on that amazing foundation.

Of course, he is also the outspoken missionary kid who wrote John 3:16 in the black patches under his eyes in a national championship game, which inspired roughly 94 million Bible-challenged viewers to Google that very, very famous Bible passage. You may also remember the media storm when he turned his brief Heisman acceptance speech into an evangelistic rally.

Now, a reporter has gone and done it, asking the quarterback a controversial question that, dang it, Tebow answered without a flinch. Here’s a piece of a typical weblog item on the fiasco, which is still leading the South Florida Sun-Sentinel sports page online. Check out the headline.

You no longer need to wonder if the devoutly spiritual Tim Tebow is a virgin.

Now you know. Responding to a question from radio reporters at SEC Media Days Thursday about whether he is saving himself for marriage, Tebow laughed initially and then said seriously, “Yes, I am.”

When another reporter stumbled through and couldn’t finish a follow-up question, the 21-year-old University of Florida quarterback laughed and said, “I think you’re stunned right now. You can’t even ask a question. … I was ready for that question, but I don’t think ya’ll were.” 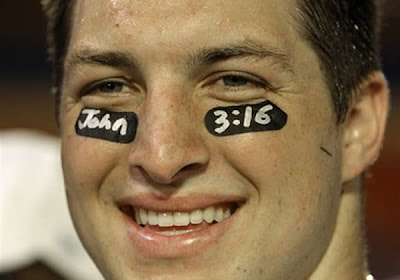 Here is more on the Tebow affect and the night before the National Championship Game:

Even Meyer would admit, however, that the Tebow Effect can be disruptive. Various Gators assistants were approaching DefCon 1 in the hours before last January’s BCS title game against Oklahoma: Fifteen or so players were not in their rooms at the team hotel and couldn’t be found. It turned out they’d been summoned to Tebow’s room, where the quarterback admitted that the immense pressure of the looming title game had begun to distract him, wear him down. Thumbing through his Bible (the one with timmy inscribed on the cover), he’d chanced upon a passage in Matthew that gave him a measure of calm and that he wanted to share with them: Come to me, all you who are weary and burdened, and I will give you rest. Take my yoke upon you and learn from me, for I am gentle and humble in heart, and you will find rest for your souls.

The verses had the desired effect, relaxing the assembled Gators so much that a kind of impromptu revival meeting broke out. Soon the entire group had broken into song.

To read more on this story please click here.
Posted by Padre Steve at 7:33 PM