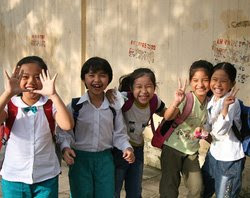 We need to continue to pray for the Church in Vietnam as pressure stays on them as they seek to stay faithful. The following comes from the CNA:

Catholic villagers in Vietnam say they are trying to follow Church teaching on contraception in the face of high fines levied against them under the country’s two-child policy. They pay the fines as a way of showing their fidelity to Catholic teaching.

Since a 1994 nationwide “family planning” program, Vietnamese have been required to have no more than two children per family. Those with two children are told to use artificial contraceptives or undergo vasectomies free of charge.

Families with more than two children must pay rice to the government as a fine, UCA News reports.

While many Catholics say they have done their best to remain faithful to Catholic teaching, some have had to resort to contraceptives because they could not afford the significant fines.

Villagers in Thua Thien-Hue province spoke to UCA News about the government's punishment.

Catherine Pham Thi Thanh, 44, said that since 1996 she has been fined a total of 3,800 kilograms of rice for having six children, who now range from two to 15 years of age. Her family makes an annual profit of only 700 kilograms of rice by producing rice alcohol and raising pigs.

In 2007, she decided to use an intrauterine contraceptive device to save her family from a 3,800 kilogram fine in the event she had a seventh child. In 2005, village authorities had confiscated the possessions of a family who could not afford to pay such fines.

Anna Pham Thi The, 50, has seven daughters ages two through 29. She also produces rice alcohol and raises pigs. She said she is willing to be fined for having more children because her husband wants a son.

Father Joseph Nguyen Van Chanh, parish priest in Huong Toan village, said 90 percent of his 1,200 parishioners have paid their fines as a way to be faithful to Church teaching. He told UCA News that Catholics are taught family planning methods during marriage preparation courses.

The two-family policy was in the news recently throughout the country when the Vietnamese prime minister chided an executive director of Vietnam Airlines for having a third child.

Vietnam’s population is close to 86 million and increases by 1.12 million annually.

Hat tip to Patrick Madrid on this one!
Posted by Padre Steve at 3:15 PM