Pray for the Church in Honduras 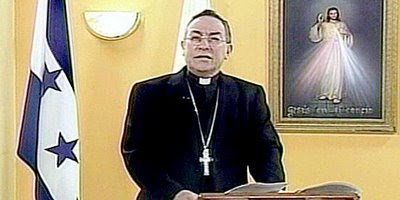 Our Salesian Cardinal Oscar Rodriguez of Honduras is speaking out on the political situation there. We need to pray for the good people of this country and for the Church there. Let's pray that peace will prevail. The following comes from the Let's Get It Right blog:

TEGUCIGALPA -- A top church leader called on ousted Honduran President Manuel Zelaya to reconsider his return, and to recall three of the Ten Commandments.

Local channels interrupted their regular programming to air a statement by Tegucigalpa's Archbishop Oscar Andrés Rodríguez Saturday morning, who addressed viewers in front of a Honduran flag and a painting of Jesus Christ.*

''On the day of your inauguration you cited three commandments of the rules of God -- not to lie, not to steal, not to kill,'' Rodríguez said. ``If you respect life, if you love life. . .please meditate because if not it could be too late.''

Rodríguez called on the Organization of American States (OAS) and other world leaders to reconsider their support of Zelaya.

Friday night, Honduras' new government withdrew from the InterAmerican diplomatic union following a visit from the organization's president José Miguel Insulza, who had attempted to broker a deal for Zelaya's return.

''To the Organization of American States, please pay attention to everything illegal that was happening before the 28th of June,'' Rodríguez said. ``This is a community that will define our own destiny without any unilateral pressures. We renounce any blockades, which will only hurt the poor.''

Dressed in the traditional black shirt, coat, and priestly white collar, Rodríguez said he spoke on behalf of 11 other Catholic bishops who signed a statement ``in support of peace.
Posted by Padre Steve at 7:20 PM

Thanks for posting Father, I am intimately involved here and as you know, Zelaya has been a die hard enemy of the Mother Church...

Zelaya, on his flight back attempting to seize power in Tegucigalpa, blasphemed, aping that other Great Blasphemer, Chavez: "I have the blood of Christ coursing through my veins"! (BBC & The Spoof) The punishment for such mortal sins is eternal death.