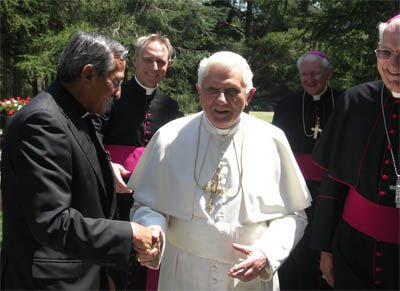 To welcome him, as well as the Bishop of Aosta, Bishop Giuseppe Anfossi, were the Rector Major of the Salesians Fr Pascual Chávez Villanueva, his secretary Fr Juan José Bartolomé, Fr Francesco Cereda, Councillor for Formation, Fr Stefano Martoglio, Provincial of the Special Circumscription for Piedmont and the Val d’Aosta (ICP), his Vice Provincial Fr Sergio Pellini, the Provincial Economer Fr Stefano Colombo and the Rector of the Salesian house of Châtillon, Fr Carlin Silvio. Also present were the civil and military authorities of the Val d’Aosta

Benedict XVI had already been a guest at the Les Combes house in the summers of 2005 and 2006, and after spending 2007 at Lorenzago, and 2008 at Bressanone he has returned to the Aosta area.

On Sunday 19 July the Pope will go to Romano Canavese, in the Province of Ivrea, for the Angelus in the square next to the parish church of SS. Peter and Solutore, while the following Sunday’s Angelus on 26 July will be at the house of Les Combes.

The Holy Father’s stay at Les Combes will conclude on 29 July when he will go to the Pontifical Palace of Castel Gandolfo.

I just read this and I thought of you Father.

I was about to email it to you!

Wow, between this and Honduras your order has been in the news a great deal....congrats.