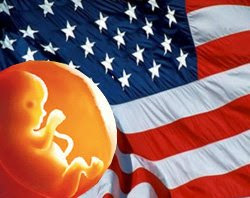 The following comes from CNA:
A new poll commissioned by the Knights of Columbus supports other reports that say Americans are increasing becoming pro-life. About 49 percent of Americans now describe themselves as pro-life, while 60 percent think abortion should be legal only in a few circumstances or not at all.
The poll, undertaken in partnership with the Marist Institute for Public Opinion at Marist College in Poughkeepsie, New York, conducted a telephone survey of 1,223 Americans in May 2009 and claims a margin of error of plus or minus three percent.

An October 2008 Knights of Columbus/Marist Institute poll showed 44 percent of Americans considered themselves to be pro-life. This figure increased to 49 percent among the May 2009 respondents. Men and women were about evenly split on abortion but were still slightly more pro-life than those polled in 2008.
Posted by Padre Steve at 8:34 PM