Vietnamese Catholics, suffering and a miracle? 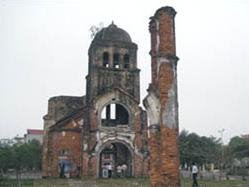 The Church in Vietnam have had their difficulties of late. Recently we heard of the problems of those trying to live their Catholic faith and suffering for violation of the 2 child policy. Now we hear of those who were brutally beaten for simply erecting a cross and altar at the site of a bombed out church building. We need to pray for the Catholic Church in Vietnam as they continue to suffer for their fidelity!
The following comes from CNA:

On Monday morning Vietnamese police in the Diocese of Vinh brutally beat hundreds of Catholics who were erecting a cross and building an altar on the ground of a church that collapsed during the Vietnam War. Dozens of Catholics were arrested in the clash.

The incident took place at 9 a.m. at the church of Tam Toa. Rumors are circulating that the government is planning to convert the church into a tourist resort, Fr. J.B. An Dang tells CNA.

“The police, who far outnumbered parishioners of Tam Toa and neighboring parishes, had fired teargas canisters at the crowd before kicking and beating them brutally with stun guns, and batons. Numerous priests and lay people were wounded.

“Some were made to sit on the ground, where again they were beaten by a youth gang employed by police, while dozens were thrown into police trucks,” he added. “At the moment their whereabouts remain unknown.”

Tam Toa is an historic parish for Vietnamese Catholics and can trace its origins back to 1631, when the Church first appeared in the country. According to Fr. An Dang, the parish quickly grew during the 1600s and was the largest parish in its region, with 1,200 Catholics. It once had an orphanage and a school operated by the Sisters of the Lovers of the Holy Cross.

In 1886 a group of anti-Western men calling themselves Van Than attacked the parish, killing 52 parishioners in what the attackers believed was retaliation against the French presence in the country.

The most recent church of Tam Toa opened in 1887 to meet the spiritual needs of the faithful. Considered to be one of the most beautiful churches in Vietnam, with Portuguese architecture and a large bell, it was largely destroyed in 1968 by U.S. Air Force bombing during the Vietnam War.

Only the church entrance and the bell tower still stand today. Parishioners had wanted to rebuild their church but were too impoverished.

Mass had been regularly celebrated on the grounds of the bombed church until March 1996. At that time the People’s Committee of Quang Binh confiscated the church, deeming it a “War Memorial Site” which must be preserved and protected “for future generations to remember American war crimes.”

The Archdiocese of Hue had protested the action without result. In May 2006 the parish was transferred to the Diocese of Vinh, whose bishop Paul Maria Cao has repeatedly asked for the return of the church.

On February 2, 2009 Bishop Cao and 14 priests of the diocese concelebrated Mass at the property. Thousands of Catholics attended to support the diocese’s efforts to reclaim the church.

Tam Toa is a home parish for more than a thousand parishioners, Fr. An Dang reports. However, their efforts to rebuild the church have been stalled by government interference.
The video below is a reminder of the struggle of the past year:
Finally, you can look at this video yourself and discern what you think. The halo around Our Lady seems to be glowing! Perhaps Our Lady is trying to encourage this suffering Church! Tell me what you think: