Saint of the Day: Pope Damasus I 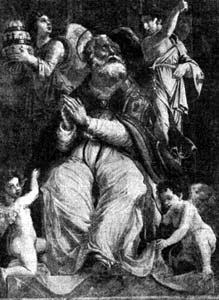 The following comes from the Patron Saints Index:
Raised in a pious family; his father was a priest in Rome, and Damasus served for a time as deacon in his father's church, Saint Laurence. Priest. Assistant to Pope Liberius. Chosen 37th pope in a disputed election in which a minority chose the anti-pope Ursinus. The two reigned simultaneously in Rome which eventually led to violence between their supporters and Damasus's false accusation of a crime.

His pontificate suffered from the rise of Arianism, and from several schisms including break-away groups in Antioch, Constantinople, Sardinia, and Rome. However, it was during Damasus's reign that Christianity was declared the religion of the Roman state. He enforced the 370 edict of Emperor Valentinian controlling gifts to prelates, and opposed Arianism and Apollinarianism. He supported the 374 council of Rome which decreed the valid books of the Bible, and the Grand Council of Constantinople in 381 which condemned Arianism.

Patron of his secretary, Saint Jerome, commissioning him to make the translation of scripture now known as the Vulgate. Damasus restored catacombs, shrines, and the tombs of martyrs, and wrote poetry and metrical inscriptions about and dedicated to martyrs. They state that he would like to be buried in the catacombs with the early martyrs, but that the presence of one of his lowly status would profane such an august place. Ten of his letters, personal and pontifical, have survived.
Posted by Padre Steve at 5:25 AM