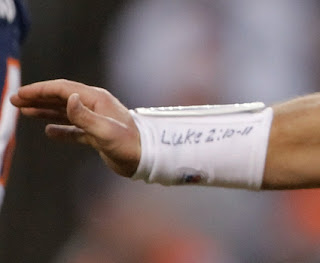 Tim Tebow, the evangelical darling who uses football as a platform for ministry, has found a way around the NFL rule that bans writing on the eye black.

Denver Broncos quarterback Tim Tebow (15) passes in front of Oakland Raiders defensive end Lamarr Houston (99) in the second quarter of an NFL football game in Oakland, Calif., Sunday, Dec. 19, 2010.
He was seen Sunday during the game between his Denver Broncos and the Houston Texans with a Bible verse written on his wrist band, usually used to store game plays. The verse appears to be Luke 2: 10-11, which says: “But the angel said to them, ‘Do not be afraid. I bring you good news of great joy that will be for all the people. Today in the town of David a Savior has been born to you; he is Christ the Lord.’”
Tebow became famous as a quarterback for the University of Florida not only for his stellar football skills but also for the unusual practice of writing a Bible verse on his eye black during every game. As the son of missionaries to the Philippines, Tebow said he views his time on the field as a platform to minister to boys and girls who look up to football players.
“In the national championship game, the verses I wore underneath my eyes, within the next two days, 94 million people had googled that,” said Tebow during a Southeastern Conference press conference in July 2009.
“When I heard that you’re like ‘wow.’ The impact that you have is incredible. And it’s truly a blessing,” he said.
The NFL prohibits players from marking their uniform, which includes the eye black, so Tebow had to figure another way to direct fans’ attention to the Bible upon entering the professional level.
He figured that out Sunday and also had a breathtaking game where he led the Broncos to a 17-0 second half comeback including two fourth quarter touchdowns. The Broncos won the Texans 24-23 in the post-Christmas game.
Tebow’s acclaim includes being the first college sophomore to win the Heisman Trophy and the first college football player to both rush and pass for 20 touchdowns in a season.
Hat tip to the Deacon's Bench!
Posted by Padre Steve at 4:30 PM