Well the Anchoress and Deacon Greg are both encouraging us to check out the Saint's Name Generator!
I got St. George!  Here is something about him from Catholic Online: 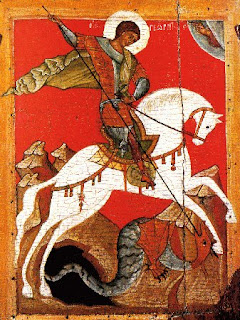 Pictures of St. George usually show him killing a dragon to rescue a beautiful lady. The dragon stands for wickedness. The lady stands for God's holy truth. St. George was a brave martyr who was victorious over the devil.
He was a soldier in the army of the Roman Emperor Diocletian, and he was one of the Emperor's favorite soldiers. Now Diocletian was a pagan and a bitter enemy to the Christians. He put to death every Christianhe could find. George was a brave Christian, a real soldier of Christ. Without fear, he went to the Emperor and sternly scolded him for being so cruel. Then he gave up his position in the Roman army. For this he was tortured in many terrible ways and finally beheaded.
So boldly daring and so cheerful was St. George in declaring his Faith and in dying for it that Christians felt courage when they heard about it. Many songs and poems were written about this martyr. Soldiers, especially, have always been devoted to him.
We all have some "dragon" we have to conquer. It might be pride, or anger, or laziness, or greediness, or something else. Let us make sure we fight against these "dragons", with God's help. Then we can call ourselves real soldiers of Christ.
Check it out and have a blessed New Year!
Posted by Padre Steve at 5:01 AM