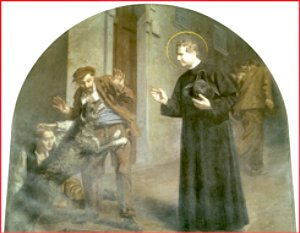 Don Bosco's life was filled with the miraculous!  Have you heard of his experience with the dog "Grigio"? I found this great story of Don Bosco at the Miracles of the Saints site:

Among all the amazing episodes in the life of Don Bosco, one of the greatest was the appearance of the dog "Grigio" -a huge grey dog that appeared suddenly at moments of danger, reappeared on many occasions and disappeared some years later when the danger was over. He asked for neither food nor shelter, was savage as a wolf against an enemy, but gentle as a lamb with the boys of the Oratory, and whom St. John "Don" Bosco gave the name of Grigio -"the grey one."

Don Bosco was once passing through the thickly populated quarter which lay near Valdocco late at night. It had a bad reputation: shady characters could skulk behind the tufts of scrub and brushwood and burst our upon the passerby. His mother, Margaret Bosco, was always anxious when her son was our late at night. Don Bosco had passed the last buildings of the town when a huge grey dog appeared and walked by his side.

He was startled at first, but as he found that the creature seemed friendly, he accepted its company and went on to the Orarory. When he reached the door the dog turned around and trotted off in the direction whence it had come. Every night henceforward, when Don Bosco was out late, the same thing happened. He found the dog waiting for him whenever there was a lonely part of the town to be traversed. 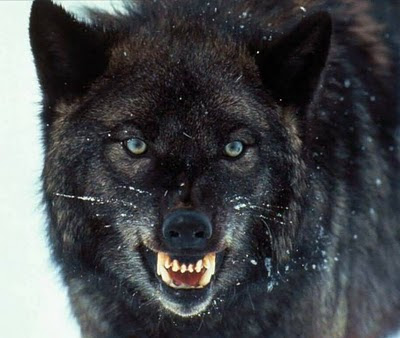 One night, he became aware of two suspicious-looking men who were following him, matching their pace to his. When he tried to avoid them by crossing the road, they crossed too. He decided to rum back, bur at the moment he did so they were on him. A cloak was thrown over his head and a handkerchief thrust into his mouth. He struggled to free himself and call for help, but it was useless. Suddenly, with a terrific howl, Grigio appeared and rushed upon them. Leaping on the one who held the cloak, he forced him to let go, then bit the second and flung him o n to the ground. The first tried to escape but Grigio was after him, rolled him too in the mud and stood over them both, growling furiously.

"Call off your dog!" they cried to Don Bosco.

"I will call him off if you will let me go about my business," he replied.

"Yes, anything..only call him off!"

"Come, Grigio," said Don Bosco, and the dog immediately obeyed, while the two men, terrified, made off in double quick time.

Another night, Don Bosco was on his way home when a man hiding behind a tree fired twice at him at such close range that it seems almost impossible that both shots had missed. Then, throwing away the pistol, the man rushed upon him. But at this exact moment, Grigio mysteriously appeared and seized the man, and dragged him a few feet away, growling fiercely all the while. He then released the man who instantly fled in terror, and the dog once more escorted Don Bosco home. 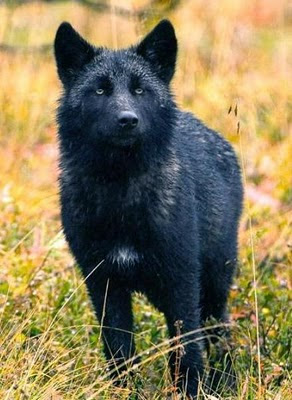 On another occasion it was from a whole band of thugs that this mysterious companion saved him. Don Bosco had reached a lonely spot when, hearing steps, he turned to see a man close to him with an uplifted stick. Don Bosco was a swift runner in those days, but his enemy was swifter and soon caught up with him. It was a moment of action. Don Bosco, with a well-directed blow of the fist, sent the man sprawling. His howl of pain brought several others out of the bushes where they had been hiding. They were all armed with heavy sticks, and things now looked black for Don Bosco. Once more, at the crucial moment, the terrific howl of Grigio was heard. He ran around and around his master, growling and showing his formidable teeth until one by one the ruffians turned and disappeared.

One night, instead of accompanying Don Bosco, Grigio went to the Oratory and refused to let him go out, lying down across the door of his room, for once growling and showing ill temper towards Don Bosco when he made the slightest attempt to dislodge him.
"Don't go out, John," said his mother; "if you won't listen to me, at least listen to that dog; he has more sense than you have."
Don Bosco gave in at last, and a quarter of an hour later a neighbor came in to warn him that he had overheard two rogues planning to attack him.

Another evening after supper the dog appeared in the playroom, and all the boys of Don Bosco's Oratory gathered around him and made much of him. They patted him, pulled his ears, stroked his head, the little ones rode on him. He regarded them with grave eyes until at last they brought him into the refectory where Don Bosco was still at supper. "Why, Grigio, old fellow, what brings you here?" he said. Grigio went up to him, put his great head on the table, looked at him and wagged his tail. 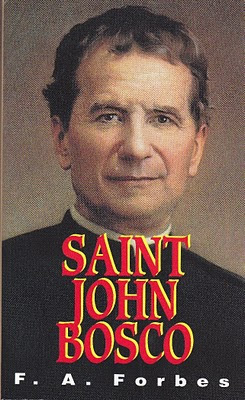 "What do you want, old boy? A bit of cheese or polenta?" No, he wanted neither."Then, if you won't have anything," said his master, stroking the great head, "then go home to bed."
Grigio gave him one long look, turned around and trotted out. The reason of this unusual visit of Grigio was never really known, but it does show the remarkable gentleness and kindness of this "stray dog" who was nevertheless incredibly vicious and protective of Don Bosco on numerous occasions.

The last time Don Bosco saw him was one night in Castelnuovo. He was going from Murialdo to Moncucco and it was growing dark. He had to pass some farms and vineyards that were guarded by savage dogs. "I wish I had Grigio here," he said to himself. As if the wish had suddenly produced him, Grigio appeared with every sign of delight at meeting his friend, wagging his tail, and he walked the whole way with him.

It was lucky he was there, for two dogs at a farm they passed rushed out upon them, but Grigio in a vicious offensive soon sent both of them flying with their tails between their legs. When Don Bosco reached the friend's house to which he was bound, they were astonished to see the magnificent dog and wondered where Don Bosco had picked him up. When they sat down to supper he was lying beside them, but when Don Bosco rose to give him some food, he was not to be seen. In fact, that was the last of Grigio. The enemies of the Saint had grown tired of plotting against him, and the mysterious protector was never to be seen again.

So how can the incredible timing and actions of "Grigio" the stray dog be explained? How is it that he mysteriously showed up at just the right moment on not one, but numerous occasions to literally save the life of Father John Bosco? Was Grigio an Angel in the form of a dog? Or was he simply a dog that was mysteriously guided by God to protect Don Bosco? But how then did he seem to appear out of nowhere? One thing is for sure: God was with St. Don Bosco because he had long ago given himself completely to the service of God, and God worked incredible miracles through his intercession, that he might be a holy example to all the poor boys who came to the Oratory that he had founded which literally became for them a heavenly refuge.

[Source for the above information is the excellent book “St John Bosco” by F.A. Forbes, Tan Books, 2000.]
Posted by Padre Steve at 8:30 AM