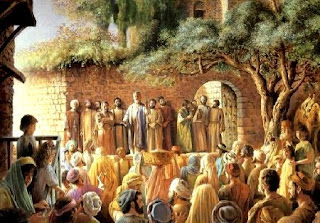 The methods and means that served the apostles to evangelize the pre-Christian world are valuable to Christians today as they seek to "re-evangelize" secularized parts of the world, the Pope's preacher told CNA.

Fr. Raniero Cantalamessa is a 76-year old Capuchin friar with a big responsibility. He is the official preacher to the Pope, those cardinals that work closely with the pontiff, members of the Roman Curia and religious superiors.

His position, as the official Preacher of the Pontifical Household, has taken him to the heart of the Vatican for the last three decades to give meditations on Fridays during Lent and Advent.

Again this year, he returned to Pope Benedict's Redemptoris Mater chapel to give three meditations which he wrote, drawing inspiration from Jesus' words in the Gospel of John: "Take courage: I have conquered the world."

The theme, he explained to CNA in an e-mail on Dec. 20, was meant to bring a "small contribution of reflection and of encouragement" to mark the creation of the Vatican’s new Pontifical Council for Promoting the New Evangelization.

The three meditations gave a response of faith, with the help of Blessed John Henry Newman's writings, to three of the "underlying obstacles" that today's culture puts in the way of accepting the Christian message: Atheistic scientism, secularism and rationalism.

In his first meditation, Fr. Cantalamessa discarded the possibility of explaining that God does not exist using science. In the second, he spoke of how Christians can counter the "eclipse" of God and the eternal with faith and evangelization. In the third reflection, the Capuchin noted that the best way to speak to those who make an idol of reason is through concrete Christian witness.

The goal of the meditations was not to be controversial, said Fr. Cantalamessa, but to bring up the themes and put them out on the table.

They were meant to open up the people that heard the talks or read them to the "spirit and core tone ... of dialogue and of serene confidence in the perennial validity of the responses offered by the Gospel," he explained.

For this reason, he chose Jesus' phrase on taking courage as the overriding theme.

It brought the focus home for the idea of the new evangelization. And, as Jesus mandated, the world in every age must be evangelized, said Fr. Cantalamessa.

The papal preacher echoed the words of the Pope when he announced the Vatican's newest department in June and charged it with the task of "re-evangelizing" countries that have strayed from their Christian past.

Fr. Cantalamessa noted that some people have gone so far as to define the current time period as "the post-Christian world."

This means that Christians today are in a situation similar to that which the first Christians confronted in the "pre-Christian world."

As such, he said, "we must discover the method and the means with which they evangelized their world because they are the same (tools) that serve us today. Such means were fundamentally the announcement 'in Spirit and power' of the Paschal mystery of Christ dead and risen, united to the testimony of life."

Now is the time to turn back to the words of St. Peter to the early Christians urging them to be ready to "give reason for the hope" that was in them, he said.

In a time when many might laugh at the idea of life being transformed by thoughts about eternity, it is exactly the "condition" of never-ending life that leads Christians to evangelize, he explained.

And, as "the eternal" entered into our time with Christ's incarnation, Christmas is therefore a "privileged occasion" to direct attention back to eternity "with the same tranquil certainty" of John the evangelist.

Reflecting on his own ministry with the Word, Fr. Cantalamessa called his ministry to two Popes across three decades both "a responsibility and a grace."

The humility of two Popes "to listen to the words of a simple priest of the Church" has been edifying, he said. At the same time, Fr. Cantalamessa explained that his position as preacher to the Pope has made him deeply aware of the Church's problems and her occasions for grace.

Fr. Cantalamessa's meditations are available on his website, www.cantalamessa.org
Posted by Padre Steve at 9:32 AM