Catholics weigh in on teens' excessive use of Facebook, texting 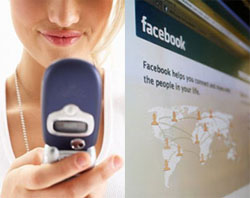 A new study linking teen's excessive use of Facebook and texting to alcohol abuse and sexual activity has ignited discussion among Catholics as to whether or not the drastic rise in impersonal communication among young people can be seen as a good thing.

But no matter one's stance on the issue, Catholics from the parish priest to the tech-savvy teen agree that parental involvement is crucial – and often, sadly lacking.

Business Week sparked debate on Nov. 9 by reporting that teens who “hyper texted” (over 120 messages sent per school day) and “hyper social networked” (over three hours spent on networking sites per school day) showed an increase risk of dangerous health behaviors such as smoking, drinking and sexual activity.

Although the amount of texting and hours spent networking online cited by the study might sound drastic to the average adult, many teens don't see it as abnormal.

“Today's young people are raised in a media saturated culture and using these various forms of communication is really like breathing to them,” Catholic author Teresa Tomeo told CNA in a Dec. 4 e-mail.

Tomeo, a former journalist and syndicated talk show host who also writes faith-based books for teens, said that parents are overwhelmed and often can't keep up with their children's ability to communicate through modern technology. She added that many parents are also caught up in “their own addictive media habits” and lack the discipline to challenge their kids to use media responsibly.

“Parents need to be more involved and really get a handle on what their children are doing online,” she stressed. “They need to educate themselves, set and stick to guidelines and not be afraid to be parents or to set limits and restrictions on the amount and types of media usage.”

One unlikely supporter of parental involvement is 16 year-old Jonathan from Omaha, Nebraska, who spoke to CNA on Dec. 6. Although excessive texting didn't land him in rehab, he noticed a sharp decline in his school performance when he got a cell phone earlier this year.

His homework began to suffer and he even found himself losing sleep, carrying on conversations with friends via text long into the night. When his parents noticed on their cell phone bill that he had racked up 3,000 texts in one month, they staged an intervention of sorts.

“They took my phone away,” he recalled. Though he was angry at first, Jonathan said he eventually understood. He said that he felt strangely relieved and noticed one day while riding in the car with his mom that they were actually carrying on a conversation instead of him being perpetually glued to his phone. Additionally, his school work started to improve.

Jonathan also opened up his own Facebook account a few months ago at the urging of his friends. He said his reactions to the online networking site have been mixed.

“The positive thing about Facebook is that you stay connected with people to a certain extent,” he said, adding that he can chat with friends and catch up with people he may have lost touch with.

The negatives though, he added, are that it's “time consuming” and often includes interactions with others that are “superficial” and can leave one feeling empty.

“It doesn't really match talking on the phone or going out for coffee with somebody,” he said.

“Your parents shouldn't have to stand over your shoulder,” he noted, “but they should know what's going on. You should be open with them about what's happening.”

Fr. Michael Warren, parochial vicar of Holy Ghost Church in downtown Denver, Colo. also added to the discussion, saying that aside from the dangers of early drinking and sexual behaviors outlined in the study, there are deeper, more ominous affects of faceless communication lurking beneath the surface.

He cited intense isolation and the inability to form real, selfless relationships with others as results of excessive texting and online networking.

“In real face to face encounters you stand before me as a real person in your own right, invested with value that does not originate in me,” he said in a Dec. 6 e-mail. “But in the cyber world I am the determiner of all value and therefore am free from the demands of the face to face encounter.”

Through online communication, he added, “the only value you have in my eyes are the values I permit you to have in my own small world.”

Fr. Warren said an additional concern is having this mentality spill over into one's spiritual life.

“As a person becomes habituated to living this way, it is not likely that God will be spared this indignity,” he said.

“Like everything else in my cyber world, God will have the value I allow him to have, and I can 'defriend' Him just as easily as I do everyone else.

However, despite the dangers of texting and Facebook, both Tomeo and Fr. Warren agree that they can be used in proper context.

“The Church in Her wisdom recognizes the advantage of online communication for faith outreach,” Tomeo said, noting both Pope Benedict XVI and the U.S. bishop's encouragement on technology being used for evangelization.

Fr. Warren added that as “with all things human, moderation is the key.” The important thing, he and Tomeo stressed, is parental involvement.

“The domestic church (the family) is a place where children should develop the essential virtues of social communication face to face,” Fr. Warren said.

“Parents should also help their children to know what the true ends of friendship and communication are,” he added. “These discoveries help the young know that they cannot define themselves but are to understand themselves as part of a larger world over which they do not have command.”

“There is simply no substitute for time spent together as a family,” he said.
Posted by Padre Steve at 11:30 AM