Pope Benedict invites Catholics to bring light to the world 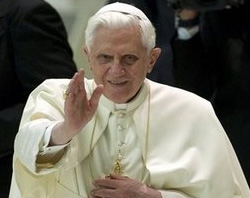 The "silent light of the truth, of the goodness of God" leads to true change in the world, said the Pope at Mass on Dec. 12.

Benedict XVI traveled outside Vatican walls for Mass at St. Maximilian Kolbe parish in an outer suburb of Rome.

In his homily the Pope recalled John the Baptist's expectation that the Son of God would bring about dramatic change in the world. The baptist sent disciples to ask Christ if he is the one who came to bring about radical change or if they should continue to wait for another.

Benedict XVI said Christ gives a response to John the Baptist's question by saying, "Look at what I have done. I have not made a bloody revolution, I have not changed the world with force, but I have lit many lights that make ... a great path of light in the millennia."

"So many" false prophets, ideologues and dictators have said that it was they themselves and not Christ who have brought change to the world, the Pope explained.

He admitted that they have succeeded in changing the world through empires, dictatorships and totalitarian rule. But, he added, "today we know that all that has remained of these great promises is great emptiness and great destruction.”

St. Kolbe, the parish's patron saint, showed this "light" in his life, said the Pope. He offered his life to guards in the place of a father of a family who was to be killed in the Nazi concentration camp of Auschwitz.

In doing so, he "encouraged others to give themselves, to be close to the suffering, to the oppressed," said Pope Benedict XVI.

St. Kolbe was declared a martyr of charity when he was recognized as a saint in 1982 by Pope John Paul II.

Pope Benedict added that other Christians such as St. Damian of Molokai who worked with lepers and Mother Teresa of Calcutta who assisted the poor lived in a similar way.

In looking to these figures, it continues to be seen that it is not "violent revolutions or "great promises" that change the world, rather it is "the silent light of the truth, of the goodness of God" that does so,” he continued.

The Pope then invited everyone to bring light to the world, to pray to become a light for others. He asked that Christians live Advent daily in all aspects of life by being ever more open to God in order to "have light amidst so many shadows, so many daily fatigues."

The Pope closed by urging fidelity in marriage, communion in parishes between families of all backgrounds, and greater involvement of young people in the life of parishes.
Posted by Padre Steve at 1:14 PM