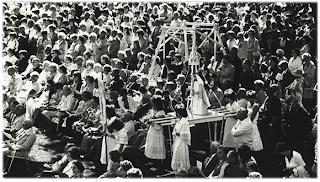 The following comes from the Diocese of Green Bay:
Bishop David Ricken announced today that he officially approves the Marian apparitions at the Shrine of Our Lady of Good Help at Champion.

The announcement was made during a special Mass for the Feast of the Immaculate Conception at the Shrine of Our Lady of Good Help at Champion.

Declared with moral certainty
Reading from his decree, the Bishop stated, "I declare with moral certainty and in accord with the norms of the Church that the events, apparitions and locutions given to Adele Brise in October of 1859 do exhibit the substance of supernatural character, and I do hereby approve these apparitions as worthy of belief (although not obligatory) by the Christian faithful."

Today’s declaration makes Our Lady of Good Help at Champion the first and only site in the United States of an approved apparition of the Blessed Virgin Mary.

Three apparitions in 1859
In October 1859, the Blessed Virgin Mary appeared on three occasions to Adele Brise, a young Belgian immigrant. Brise stated that a lady dressed in dazzling white appeared to her and claimed to be the "Queen of Heaven who prays for the conversion of sinners."

The Lady asked Brise to pray for sinners, as well as to gather the children and teach them what they should know for salvation. The Blessed Virgin followed the commands with these words of assurance to Adele Brise, "Go and fear nothing, I will help you."

Since 1859, countless faithful have made the pilgrimage to Champion, Wisconsin to offer prayers of thanksgiving and petition to Jesus and to ask for intercession from Our Lady of Good Help.

Fulfilling obligations
After receiving the apparitions, Adele Brise immediately began to fulfill the obligations the Blessed Virgin entrusted to her. She gathered local children and taught them how to pray, make the sign of the cross, and to give love, thanks, and praise to the Lord.

As part of her commitment to the Blessed Virgin, Brise set up a Catholic school and began a community of Third Order Franciscan women. Eventually, a school and convent were built on the grounds to further the mission entrusted to Brise. 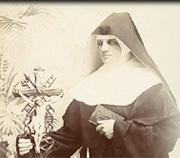 Spared during Peshtigo fire
The 151-year history of the Shrine is rich with written and oral accounts of prayers that have been answered at the Shrine of Our Lady of Good Help. The sources document physical healings and conversions that have taken place as a result of pilgrimages to the Shrine.

In addition, as the Peshtigo fire of 1871 engulfed the surrounding area, the entire five acres of land consecrated to the Blessed Virgin remained unscathed. It is believed that the land was spared after Brise organized a prayer vigil that circled the area.
Here is the link to the basic information on the apparition.

For more info on this apparition check out the Spirit Daily site.
Posted by Padre Steve at 7:03 PM