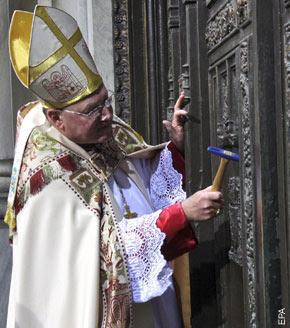 Rocco is following all of the activity closely here.
The following story comes from the AP:

The installation of New York Archbishop-designate Timothy Dolan is stretching over two days in St. Patrick's Cathedral, in services before thousands of well-wishers ranging from his second-grade teacher to the Vatican's U.S. ambassador.

Dolan, 59, the former Milwaukee archbishop, is taking over the most visible American job in the Roman Catholic Church and the nation's second-largest diocese after Los Angeles.

Cardinal Edward Egan, 77, is retiring as New York's archbishop after nine years. Dolan is expected to eventually be made a cardinal, as well.

His predecessors were men who were prominent not only in the church, but also in broader society. Cardinal Francis Spellman was so influential in New York politics that his residence was dubbed "the powerhouse." Cardinal John O'Connor was the most forceful U.S. Catholic voice in the public debates of his era. In the 2000 election, when President George W. Bush apologized for visiting Bob Jones University, which considers Catholicism a false religion, he wrote a public letter of contrition to O'Connor.

Read the rest of the story here.
Posted by Padre Steve at 5:45 AM