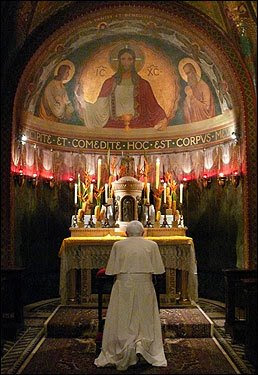 The following comes from the Zenit.com site:

Benedict XVI is urging Catholics to pray for vocations with the confidence that God never ceases to call, and that he will give the graces for a generous response.

The Pope affirmed this in his message, published today, for the next World Day of Prayer for Vocations to the priesthood and to the consecrated life, planned for May 3. The theme of this day is "Faith in the Divine Initiative -- the Human Response."

"Pray!" he urged the Church, emphasizing that "prayer for vocations should be continuous and trusting."

"The vocation to the priesthood and to the consecrated life," the Pontiff explained, "constitutes a special gift of God which becomes part of the great plan of love and salvation that God has for every man and woman and for the whole of humanity."

God takes the initiative, he noted, "of choosing some to follow his Son Jesus Christ more closely, and to be his privileged ministers and witnesses."

The Holy Father stated, "Let us give thanks to God, because even today he continues to call together workers into his vineyard."

Even with current shortages of priests in some regions, he added, "we are sustained by the unshakable certitude" that the Lord "freely chooses persons of every culture and of every age and invites them to follow him according to the mysterious plans of his merciful love."

Benedict XVI noted: "Our first duty, therefore, is to keep alive in families and in parishes, in movements and in apostolic associations, in religious communities and in all the sectors of diocesan life this appeal to the divine initiative with unceasing prayer.

"We must pray that the whole Christian people grows in its trust in God, convinced that the 'Lord of the harvest' does not cease to ask some to place their entire existence freely at his service so as to work with him more closely in the mission of salvation."

The Pope exhorted those who are called to a vocation to respond with "careful listening and prudent discernment, a generous and willing adherence to the divine plan, and a serious study of the reality that is proper to the priestly and religious vocations, so as to be able to respond responsibly and with conviction."

The contemplation of the Eucharist, he noted, an expression of the "free gift of the Father in the Person of his Only Begotten Son for the salvation of mankind, and the full and docile readiness of Christ" to follow the will of God, "we can more readily understand how faith in the divine initiative models and gives value to the human response."
The Pontiff explained that "it is priests who are called to perpetuate this salvific mystery from century to century until the Lord's glorious return, for they can contemplate, precisely in the Eucharistic Christ, the eminent model of a 'vocational dialogue' between the free initiative of the Father and the faithful response of Christ."

He added: "In the celebration of the Eucharist it is Christ himself who acts in those whom he chooses as his ministers; he supports them so that their response develops in a dimension of trust and gratitude that removes all fear, even when they experience more acutely their own weakness, or indeed when the experience of misunderstanding or even of persecution is most bitter.

"The awareness of being saved by the love of Christ, which every Mass nourishes in the faithful and especially in priests, cannot but arouse within them a trusting self-abandonment to Christ who gave his life for us.

"To believe in the Lord and to accept his gift, therefore, leads us to entrust ourselves to him with thankful hearts, adhering to his plan of salvation."

Thus, the Holy Father affirmed, "the one who is 'called' voluntarily leaves everything and submits himself to the teaching of the divine Master; hence a fruitful dialogue between God and man begins, a mysterious encounter between the love of the Lord who calls and the freedom of man who responds in love."

"This intertwining of love between the divine initiative and the human response is present also, in a wonderful way, in the vocation to the consecrated life," stated Benedict XVI.

He added, "Jesus is the model of complete and trusting adherence to the will of the Father, to whom every consecrated person must look."

The Pope asked, "Who can embrace the consecrated life relying only on his or her own human powers?"

"Once again," he affirmed, "it is useful to reiterate that the response of men and women to the divine call, whenever they are aware that it is God who takes the initiative and brings his plan of salvation to fulfillment, […] expresses itself in a ready adherence to the Lord's invitation."

The Pontiff added that this "becomes communion with the One who makes it possible for us to bear much fruit."

He pointed to the "emblematic human response, full of trust in God’s initiative," of the Blessed Virgin, who gave her "humble and decisive adherence to the plan of the Most High."

"Dear friends," said the Holy Father, "do not become discouraged in the face of difficulties and doubts; trust in God and follow Jesus faithfully and you will be witnesses of the joy that flows from intimate union with him."

He concluded: "Imitating the Virgin Mary whom all generations proclaim as blessed because she believed, commit yourselves with every spiritual energy, to realize the heavenly Father's plan of salvation, cultivating in your heart, like her, the ability to be astonished and to adore him who is mighty and does 'great things,' for holy is his name."
Posted by Padre Steve at 1:26 PM