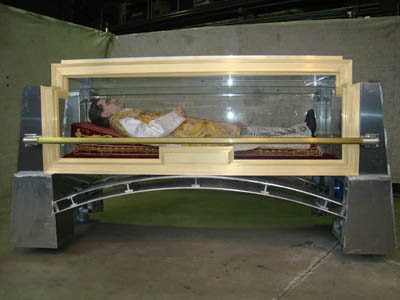 The following comes from the ANS in Rome:
On 25 April at Valdocco, Turin, in the Basilica of Mary Help of Christians the casket containing a special relic of Don Bosco will be blessed before setting out to visit in the next few years the countries in which the Salesians are present.
The pilgrimage of the casket which will cross the five continents is the idea of the Rector Major of the Salesians, Fr Pascual Chávez Villanueva, in preparation for the bi-centenary of the birth of Don Bosco to be celebrated in 2015.

The presentation and the blessing of the casket will take place in conjunction with the celebration of the Thanksgiving Feast-day of the Special Circumscription of Piedmont and the Val d’Aosta (ICP). After presiding at Mass Fr Pascual Chávez will bless the casket which will be carried in procession from inside the Basilica of Mary Help of Christians to the courtyard outside.

From the courtyard where the Saint from Turin worked for the benefit of so many boys, the casket will begin its pilgrimage round the world.

The Casket
The casket, the work of the architect Gianpiero Zoncu, has been made of aluminium, bronze and glass. The artists employed were Marco Berrone (blacksmith), Francesco Boglione (carpenter), and the glass is from the Bivetro Company. The De Carli Artistic Foundry produced the metal structures and the Perlaluce Company was responsible for the illumination.

The base of the casket is in the form of a bridge supported by four pillars which bear the dates of the bi-centenary: 1815-2015. They are decorated, on the ends of the casket, with square tiles with the faces of young people from the five continents made by the sculptor Gabriele Garbolino. The coat of arms of the Salesian Congregation which this year is celebrating the 150th anniversary of its foundation and the charismatic motto adopted by Don Bosco himself – Da mihi animas, cetera tolle – complete the decoration of the case.

Inside is a statue of Don Bosco similar to the one in the casket preserved in the Basilica of Mary Help of Christians. It was made by the sculptor Garbolino and the Apostolato Liturgico, and Sr Anna Scaglia FMA made the vestments. The face has been reproduced from the mask made by Cellini the day after Don Bosco died.

The pilgrimage
At the end of the short blessing ceremony, the casket will begin its pilgrimage around the world. The logistics for the pilgrimage have been entrusted to the Roberto Bertoli Company and the Missioni Don Bosco in Turin.

The first stage will be in Lazio. After a stop at the Poor Clares Monastery in Città della Pieve, the casket will travel through several cities - Frascati, Latina, Formia, Castelgandolfo, Genzano – and stop at several Salesian houses in the capital. The pilgrimage in the Lazio region will finish at the end of June at the Generalate of the Salesians in via della Pisana and will then head off for Latin America.

The first international phase of the pilgrimage will see the casket in the Salesian Region of America South Cone and it will pass through Chile, Argentina, Uruguay, Paraguay and Brazil.

We're joyfully anticipating having Don Bosco Among Us in Montreal!

Don Bosco is welcome in the Philippines. I wish it's already January. :)

thanks so much for the blog-initiative! inspirational!
i love Don Bosco, will try create one such blog for the visit of the Casket to South Asia!