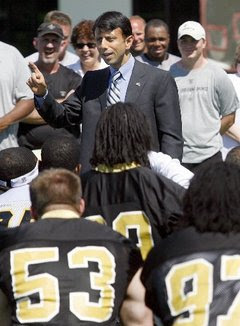 The Saints and the State of Louisiana have reached a deal!!!

The AP reports that New Orleans Saints have agreed to a lease extension that will keep the NFL team playing home games in an improved Louisiana Superdome through the 2025 season.

An announcement by Saints owner Tom Benson and Louisiana Gov. Bobby Jindal has been scheduled for 10 a.m. Thursday at the Superdome.

A person with direct knowledge of lease negotiations confirmed to The Associated Press that a general agreement has been reached and was expected to be signed later in the week after final details have been worked out. The person spoke on condition of anonymity because the team and governor had yet to make the announcement.

The New Orleans Saints and the state have reached a deal for the team to stay in the Superdome through 2025
Benson and Jindal wanted a long-term extension in place by this spring to improve New Orleans' bid to host the 2013 Super Bowl.

It would be the city's 10th Super Bowl and the seventh in the Superdome, an iconic, 34-year-old structure that has hosted some of the nation's most memorable sporting events, world famous musical acts and even the late Pope John Paul II.

On Wednesday, a video presentation of the proposed deal was shown in Baton Rouge to state legislators, who will have to approve the new lease. Afterward, state Sen. John Alario said the complex deal would cap direct state cash payments to the NFL team at about $6 million a year.
For more on this story click here.
Posted by Padre Steve at 8:01 PM