As in 2008, Pope focuses Good Friday meditations on persecuted Christians 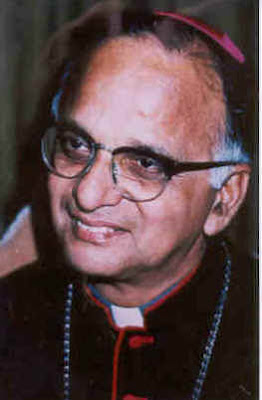 Pope Benedict has chosen a Salesian to prepare the Good Friday meditations for him for the second year in a row!  Last years meditations were prepared by Cardinal ZenZe-kiun, SDB of Hong Kong and this year they will be prepared by Archbishop Thomas Menamparampil, SDB of Guwahati, India.  The following comes from the CNA site:

For the second year in a row, Pope Benedict XVI has asked that the meditations for the Good Friday Way of the Cross (Via Crucis) ceremony be focused on the plight of persecuted Christians around the world.

Last year's Via Crucis, written by the Archbishop of Hong Kong, Cardinal Joseph Zen Ze-kiun, featured the reflections that were relevant to the Church in China. Cardinal Zen called on the Church to remember the persecuted, as they experience "in their bodies the Passion of Jesus."

This Good Friday, Archbishop Thomas Menamparampil of Guwahati, India, will offer the meditations for the Via Crucis reflect on the question of evil in the world, on pain and on the various forms of suffering which are, he writes, a "symbol of the presence of the cross of Christ in our lives."

Archbishop Menamparampil will also mention the plight of persecuted Christians in India and the oppressed peoples of Sudan and the Congo. In these places, he says, we see a type of violence that "destroys ethnic and religious groups" and conflicts that are "fueled by economic interests."

The Way of the Cross will be presided over by Pope Benedict on the evening of Good Friday, April 10 at the Colosseum in Rome.

EWTN will feature coverage of all the major papal events during Holy Week as well as the papal nuncio to the U.S., Archbishop Pietro Sambi, celebrating the Solemn Mass of the Lord's Supper live from The Basilica of the National Shrine of the Immaculate Conception in Washington D.C.