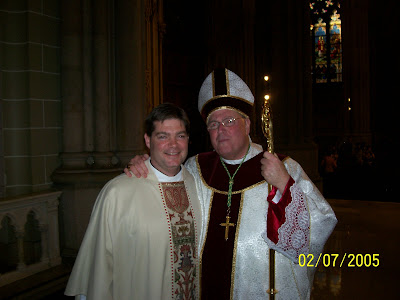 The Salesian Sisters celebrated their 100 years of service in the USA yesterday with a mass at St. Patrick's Cathedral with the new Archbishop! Congrats to the sisters and may they be richly blessed with another 100 years of blessed service to the Church and young people here in the US. I was able to concelebrate for the mass and enjoyed a moment with Archbishop Dolan following the mass. He is an amazing person and reminds me of the pastor of my church when I was a kid, the late Fr. Charles Pagluighi. Here is a recent article on the new Archbishop from the AP:

In his first days as head of the Roman Catholic Church in New York, Archbishop Timothy Dolan celebrated Mass in prison, talked baseball in the Yankees and Mets broadcast booths, visited the World Trade Center site and nibbled matzo at a symbolic Seder.

Everywhere he went, the cleric was quick with a smile, a joke and a hug.

To a youngster at the Seder he quipped, "I know you'd rather be in math class!" He told inmates at the Bedford Hills Correctional Facility that he loves ministering to prisoners because, "You're the only people who never leave Mass early." He also obligingly autographed a Bible for an inmate.

Observers say the extroverted, media-savvy Dolan is a good fit for the media capital of the world, and his arrival comes at a crucial time for the church. Dolan's job is the most visible Catholic post in the country, and he is taking on the high-profile job at a time when the church is struggling to recruit priests and to beef up attendance at Mass.

"He's just a very friendly guy," said the Rev. David O'Connell, president of the Catholic University of America. "He's right out of central casting for this role."

Dolan, 59, was installed as head of the New York Archdiocese on April 15 after leading the Milwaukee Archdiocese since 2002.

He succeeds Cardinal Edward Egan, an austere figure who is hard to picture wearing a Mets jersey over his clerical garb.

O'Connell said Egan's main priority had been to put the Archdiocese's finances in order.

"And he did," he said. "He was not the gladhander, and he was not the bon vivant. Now that that work has been done, the time has come for someone who can engage people, who can give people a sense of the joy of the gospel."

Like Egan, Dolan is a firm advocate for the church on hot-button topics like abortion and the all-male, celibate priesthood.

He vowed at a news conference before his installation in St. Patrick's Cathedral to fight efforts to legalize same-sex marriage in New York.

But he beamed as he greeted Mayor Michael Bloomberg, Gov. David Paterson and other elected officials who support gay marriage and abortion rights.

Those who know Dolan say the private man matches the public persona.

"He always has that smile on his face," said Julie Wolf, communications director for the Milwaukee Archdiocese. "He just enjoys being with people."

The New York Archdiocese encompasses 2.5 million parishioners and nearly 400 churches in parts of New York City and its northern suburbs. It is the nation's second-largest diocese after Los Angeles.

Like other archdioceses around the country, New York has been struggling to find priests while closing a handful of parishes for economic reasons.

According to the Center for Applied Research in the Apostolate at Georgetown University, there were 3,141 Catholic parishes in the U.S. without a resident priest last year, and just 36 percent of adult Catholics said they attend Mass weekly.

At his April 20 visit to Bedford Hills, New York State's only maximum-security women's prison, Dolan celebrated Mass for 150 inmates and then hugged them individually. A white-robed Dolan was pictured in the Daily News the next day with one hand on a prisoner's shoulder and the other hoisting his ceremonial staff, the very image of the good shepherd.

"The inmates were very moved that he visited," said Erik Kriss, a spokesman for the prison system.

At the post-Passover symbolic Seder, an interfaith service for middle schoolers from a Catholic school and a Jewish day school, Dolan exhorted the Catholic students to "learn from today."

The event was hosted by the Anti-Defamation League, whose national director, Abraham Foxman, said he still was "on a high" from meeting Dolan the next day.

"He'd make a great politician, but he's a representative of God, so that's good," Foxman said. "It will go beyond him shepherding his own flock. His magnetism will reach out to other communities. By doing that he has the opportunity to bring this city together."