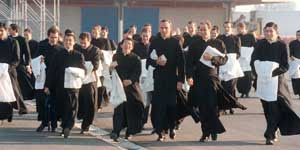 For those of us who work in vocation ministry this story won't be a big surprise. Those responding to vocations are coming in younger! Let's continue to pray that God will bless us with more and more good and holy vocations. The following comes from the Catholic News Agency:

Priests to be ordained in 2009 tend to be younger than those of recent years and come from a variety of different backgrounds, the U.S. Conference of Catholic Bishops (USCCB) reports.

The Archdiocese of Portland, Oregon will ordain seven, its largest class since the early seventies.

There are several converts among the 2009 ordination class. Benjamin Roberts, of the Diocese of Charlotte, North Carolina, considered ordination in the Lutheran Church but converted to Catholicism in 1999. The Washington Archdiocese’s Daniel Gallaugher was raised as an Evangelical Protestant. Two ordinands from the Archdiocese of Detroit were Baptists.

Daniel Maxwell, an ordinand from the Diocese of Baker, Oregon who entered the Catholic Church at 17, is from a family who hasn’t had a Catholic blood relative for 200 years.

Some ordinands come from notably large families. Jacob Runyon, from Fort Wayne-South Bend, is oldest of 11. Matthew Mason of the Diocese of Manchester, New Hampshire is the oldest of seven. The Philippines-born Giopre Pardo of Oakland is one of seven brothers, one of whom is a priest and seminary spiritual director in the Philippines.

Several other ordinands were foreign-born, the USCCB reports.

Joel Bugas, a 43-year-old to be ordained or the Archdiocese of Santa Fe, was a three-term mayor in his home town in the Philippines.