Turin Shroud 'could be genuine as carbon-dating was flawed' 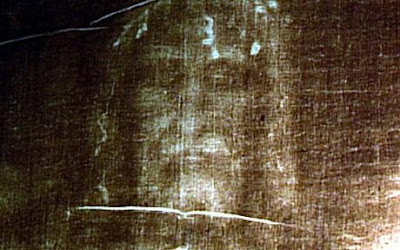 I have always believed the Shroud of Turin was real, but now it seems that science is giving it a second look!  The following comes from the Telegraph site in UK:

Radio carbon dating carried out in 1988 was performed on an area of the relic that was repaired in the 16th century, according to Ray Rogers, who helped lead the Shroud of Turin Research Project (STRP).

At the time he argued firmly that the shroud, which bears a Christlike image, was a clever forgery.

But in a video made shortly before his death three years ago, he said facts had come to light that indicated the shroud could be genuine.
Rogers, a chemist from the Los Alamos National Laboratory in New Mexico, said: "I don't believe in miracles that defy the laws of nature. After the 1988 investigation I'd given up on the shroud.

"But now I am coming to the conclusion that it has a very good chance of being the piece of cloth that was used to bury the historic Jesus."

He came to his conclusion after re-examining a theory from two amateur scientists that he had earlier dismissed as being from "the lunatic fringe".

Sue Benford and Joe Marina, from Ohio, suspected the 1988 sample was from a damaged section of the linen shroud repaired in the 16th century after being damaged in a fire.

Rogers said: "I was irritated and determined to prove Sue and Joe wrong."

However, when he came to examine threads taken in 1978 - luckily from the same section as the 1988 sample - he found cotton in them.

He said: "The cotton fibres were fairly heavily coated with dye, suggesting they were changed to match the linen during a repair.

"I concluded that area of the shroud was manipulated by someone with great skill.

"Sue and Joe were right. The worst possible sample for carbon dating was taken.

"It consisted of different materials than were used in the shroud itself, so the age we produced was inaccurate."

In the video, made shortly before he died of cancer in March 2005, he said: "I came very close to proving the shroud was used to bury the historic Jesus."

This latest evidence, to be broadcast in The Turin Shroud: New Evidence at 8 pm on Sunday on the Discovery Channel, is the latest chapter in the shroud's history.

The result overturned 10 years of hope among Christians that it was real, after the first scientific tests found evidence of blood and serum stains.

The earliest documented sighting of the shroud is from 1353, but last week a historian claimed in the Vatican's newspaper that she had found a "missing link" in the Holy See's Secret Archives proving the Knights Templar had safeguarded it during the 13th century.
Posted by Padre Steve at 4:59 PM