Saints and Founders of the Salesian Family 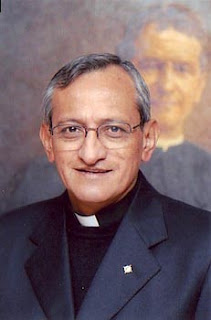 In this way was born a true school of holiness which continues in our own time. From Don Bosco the founder, subsequent founders of new groups drew inspiration and guidance, spirituality, and pastoral method (Charter of Salesian Identity, 1).

“A good tree does not give bad fruit” (Luke 6:43). This verse from St. Luke is significant for the history of the development of the Salesian charism. Don Bosco gave his life a gospel meaning by putting it at the service of the young to help them to be holy and to be upright citizens. He stands for the good seed which became a good tree whose fruit is excellent. He was the pattern on which saints were modeled.

Don Bosco’s first successor, Blessed Michael Rua, was seen as a new Don Bosco; he made fidelity to the Founder his own plan of life and action, and under him the Salesians grew from 773 to 4,000, the houses (schools, youth centers, and missions) from 57 to 345, the provinces from 6 to 34, in 33 countries. Paul VI beatified him in 1972, saying, “He made the spring a stream, a river.”

Blessed Philip Rinaldi, Don Bosco’s third successor, gave a new impetus to the interior life of the Salesians, putting absolute trust in God and in Mary Help of Christians; he sent 1,800 Salesians to the missions, founded the Don Bosco Volunteers movement, who live consecrated lives without leaving their families or workplaces.

Saint Mary Mazzarello was the co-foundress of the Salesian Sisters (FMAs) with Don Bosco, intelligent, strong-willed, endowed with great emotional balance. After a period of illness she devoted her life to the education of the girls in Mornese, through a sewing and dressmaking workshop, a feastday oratory, and a home for little girls without parents. A meeting with Don Bosco (1864) was decisive as he suggested to her a way of broadening her desire for the apostolate. So together on August 5, 1872, they founded a new religious family for the benefit of the young. From this splendid fruit grew a great new apostolic enterprise which today numbers about 15,000 sisters with such splendid examples of holiness as the three blesseds Madeleine Morano, Maria Romero, and Eusebia Palomino and many other women of God.

Among the Salesian Cooperators is Blessed Alexandrina da Costa, whose life was marked by the serious accident she had from escaping a violent attack that left her immobile for over 30 years, sustained spiritually but also physically by the Holy Eucharist; for 13 years her only food was the consecrated host. She made her promise as a Cooperator and offered her sufferings for the Salesian mission to the young.

Then there is the Servant of God Attilio Giordani, who decided to leave for Brazil with his wife, and with his children devoted his life to voluntary service; and again Cardinal Joseph Guarino, who welcomed the first Salesians to Sicily and gave them an inheritance that enabled them to open the houses at Alì for the FMAs and Messina for the SDBs, and with a Salesian spirit in 1889 founded the Apostles of the Holy Family.

Blessed Louis Variara, a Salesian dedicated to the welfare of the least fortunate, especially the lepers in the Agua de Dios colony, transformed the lives of the 800 sick people and the other inhabitants, helping them in a way that was both full of cheerfulness and deeply spiritual. Then he gathered together from among the lepers a group of young women to share his apostolic passion and founded in 1905 the Daughters of the Sacred Hearts of Jesus and Mary.

Also highly significant was the life of Bishop Joseph Cognata of Bova Marina, founder of the Oblates of the Sacred Heart. The indescribable suffering brought about by the calumnies which led to his having to put aside his role as bishop for 22 years did not weaken his faith. He was rehabilitated, and now work is in progress to move forward the cause of his beatification.

I should like to finish, however, with one of the Volunteers with Don Bosco, Nino Baglieri, who died two years ago: a life considered worthy of a future process of beatification. A builder, at 17 years of age he fell from a scaffold and was totally paralyzed. At first he lived in a mood of rebellion, but then the Spirit entered his heart. He began to make of his situation an intense offering and prayer, becoming for many people a spiritual focal point. He learned to write using his mouth, and this enabled him to leave behind some precious testimonies: “No one is excluded from holiness; it depends on us, on how we say our ‘Yes’ to the Lord. And if someone hears in his heart the voice of the Lord calling him to follow Him in consecrated life, don’t be afraid to say your own complete ‘Yes.’ A yes to life!”

Today the Salesian Family has 8 saints, 110 blesseds, 8 venerables, and 28 servants of God. Holiness is waiting for us.
Posted by Padre Steve at 5:50 AM

The art you included here is very moving.

thanks for the information,,,,,,,,,,,,, i am too a Salesian of Don Bosco from India. this information was very handy as i was refering it to prepare a talk on Don Bosco's factory of Saints.