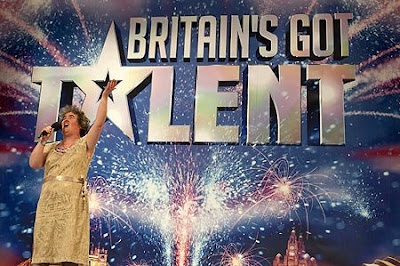 The world has taken notice of the wonderful voice of Susan Boyle! Here is more on her from CNS:

The audience snickered and the judges of "Britain's Got Talent" either rolled their eyes or allowed their blank expressions to betray their bemused skepticism as the awkward-looking middle-aged woman told them she wanted to be as famous as the popular British actress and singer Elaine Paige.

Then Susan Boyle began to sing, and they were spellbound and shocked by the beauty of her voice and rose to their feet in applause.

But Father Basil Clark, who watched the show on television at his home in Broxburn, Scotland, was not surprised.

He has seen the situation unfold many times before, having regularly accompanied Boyle, 47, on the annual Legion of Mary pilgrimage to the Marian shrine in Knock, Ireland.

"When I watched the judges' faces it reminded me of what I was like when I first saw Susan singing -- absolutely blown away by the quality of the singing and by that fantastic voice," said Father Clark, dean of West Lothian, the district that covers Boyle's home village of Blackburn."

Anyone who sees her for the first time behaves the same way. I have never heard her sing badly, though she might lose the words if the stress gets too much," he told Catholic News Service in an April 16 telephone interview.

Boyle first appeared before judges Simon Cowell, Piers Morgan and Amanda Holden on the ITV1 sister show of "America's Got Talent"; it was broadcast April 11.

Her fame spread on the Internet, and in just five days she had attracted more than 15 million YouTube viewings of her rendition of "I Dreamed a Dream," from the musical "Les Miserables."

Part of Boyle's attraction is that she appears to be such an unlikely candidate for stardom. She said on TV that she has "never been kissed" and has lived alone with her cat since her mother died in 2007.

According to British media, she has learning disabilities as a result of being starved of oxygen at birth. She is unemployed and, as a churchgoing Catholic, her social life revolves around her family and her parish of Our Lady of Lourdes. She also enjoys karaoke in her local pub.

Father Clark said, "When she gets up to sing it can either be wonderful or you can get the unpredictable eccentric behavior, but it is to do with the fact that she has learning difficulties.

"In a sense, there is a beautiful voice trapped in this damaged body," he said. "It is an absolute contrast. There she was on television acting very peculiarly and the audience was expecting peculiar things to happen and then a voice of an angel comes out -- and that's Susan.

"Father Clark said that local people who knew Boyle, the youngest of nine children of a family descended from Irish migrants, were "enormously proud of her and wish her the best but they are aware of the risks she is running," adding that her behavior has previously drawn cruel taunts from children."

People are slightly worried about what might happen after this bout of fame," he explained.

"I am quite worried for her," he added. "I think it's great at one level. It might just be the thing that will make her, but she is a very vulnerable person and it could be quite difficult.

"It is a great opportunity for her and as far as I am concerned she should make the best of it, and if it lasts, it lasts, and if it doesn't, then it's still more than almost any one of us will ever achieve," he added. "It is important in sustaining her and making sure this is all a very, very beneficial experience."

He described Boyle as "a woman of great faith" who was often "very gentle and very caring" though she could also be "needy and demanding."

The world's media has camped outside Boyle's home where she grew up and where she still sleeps in the same room as when she was a child.

But Boyle has decided to temporarily escape the limelight to stay with friends as she prepares for the next round of the competition, in which she is expected to sing "Whistle Down the Wind," by Andrew Lloyd Webber.

She did give an interview to "The Early Show" on CBS News in which she said that her instant fame "hasn't really sunk in yet."

She said that she wanted to make her performance "a tribute to my mother" who had encouraged her to sing.

"I knew it was something I had to do," she said. "I had to get on with it. That's where the courage came from, my mother.

I think this brings us to tears when we hear her sing, because her beautiful voice is a gift from God. Let us hope He touches people's souls through this phenomenon.

There is a lot of chatter going on analyzing why Susan is such a phenomenon. Don’t they know angels walk amongst us? True, such are rarely revealed on such a huge stage. I prefer it a lesson on how the Lord sees His children. Imperfect but for the unmistakable stamp He has place on each one. With that special gift we are made complete. I’ve watched that video at least one million times of the 50 million, and counting. Susan is perfect, and she is an angel.